Intro I wrote for a Flint Henry collection published by SQ Productions:

An appreciation, exultation and excoriation of all things . 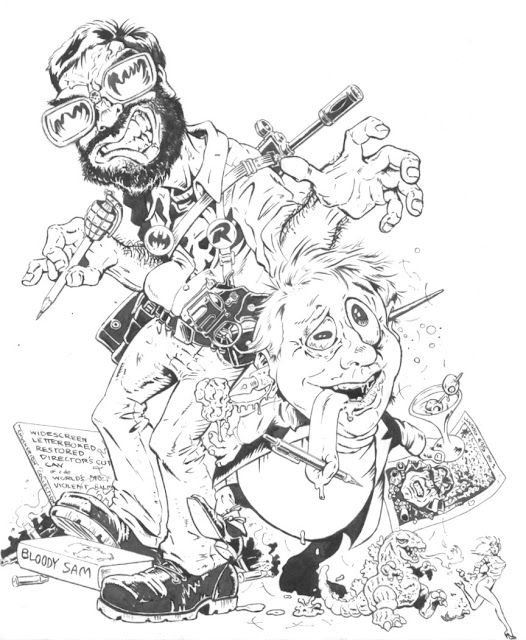 For as long as I’ve been in comics, twenty years now, Flint Henry has been my closest collaborator.


Sure, I worked with other artists longer but no one has been more in line with my way of working than has.


We created Lawdog together for Epic. We worked on lots of Batman related projects at DC and a few Punisher stories at Marvel. He did lots of behind-the-scenes design work on stories of mine. We did one totally kick-ass story for Savage Sword of Conan. And there’s an unprintable Joe Potato story that will never see the light of day. For years we’ve batted around a dream project called All–Death Comics. And recently has been helping out with design work on Iron Ghost, a mini-series from ATP and Image that’s in stores as you read this.


He had a legendary run on First Comics’ Grimjack that followed his debut work on Monday the Eliminator; a back-up on Eclipse Comics Scout as well as a Beau LaDuke mini-series call Dogs of Danger penned by mutual pal Beau Smith. He supplied dozens of covers to American reprints of 2000AD characters Judge Dredd and Nemesis. His uncredited design work on countless role playing figures is as amazing in its attention to detail as any of his comics work. He’s been the editor of Sketch magazine until just recently and leant his considerable charm to that publication with interviews and articles. 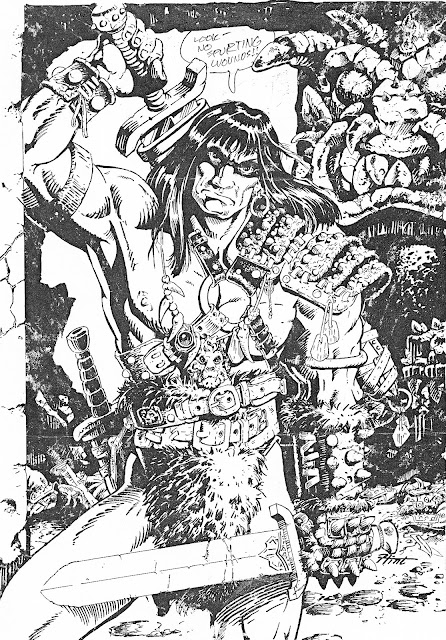 He’s my dearest friend in the business and easily the most talented creative mind I’ve ever had the pleasure to work with.


The guy is a wealth of talent and a font of knowledge. Ask him for a few ideas and he’ll whip up twenty model sheets with detailed turnarounds and pages of notes. You could go broke on fax paper with this guy. Your e-mail will crash under the goggle-bytes of jpegs that a simple request for reference will call forth. Call him on the phone and prepare for a staccato toboggan ride of rapid-fire jokes, songs and concepts and history all presented in a self-effacing manner that would make T.S. Eliot’s pair of ragged claws seem like an egomanic.


He’s got file after file in his head of forgotten comic art minutia and arcane movie and music trivia. No one else I know can do twenty minutes on Tom Sutton that’ll leave you informed as well as wiping away tears of laughter. A phone call turns into a wild, free-form stand-up routine that circles and comes back on itself in a comedic form of the avante garde jazz loves so much. 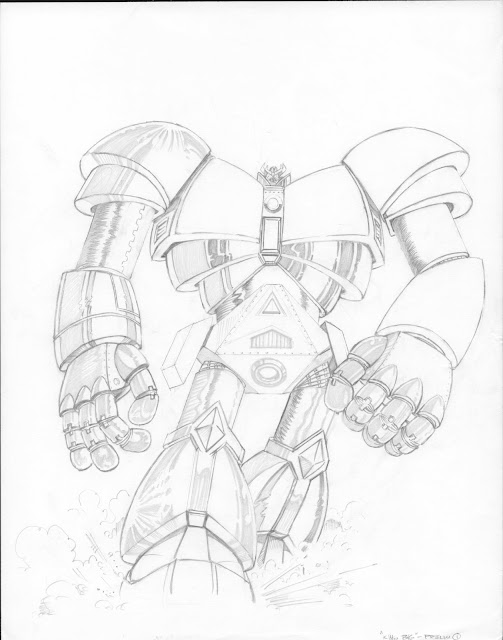 Though he’s never had the exposure or appreciation he’s deserved, is one of the most influential artists in comics. You see his reflection everywhere from movie design to album art and tattoo work. He’s been a touchstone for an entire generation of comic artists who went on to more fame and fortune than himself. His fans number most of the white-hot talents working in comics today.


You can see why in the pages that follow this. A wild sense of style coupled with a bottomless well of imagination. He draws from countless sources of obscure material culled from the world over and weds them together into something all his own. The insane levels of detail. The sense of fun that permeates even his most venal pieces. has an unapologetic sense for the exploitative and a refined taste for the more mondo and gonzo side of life. 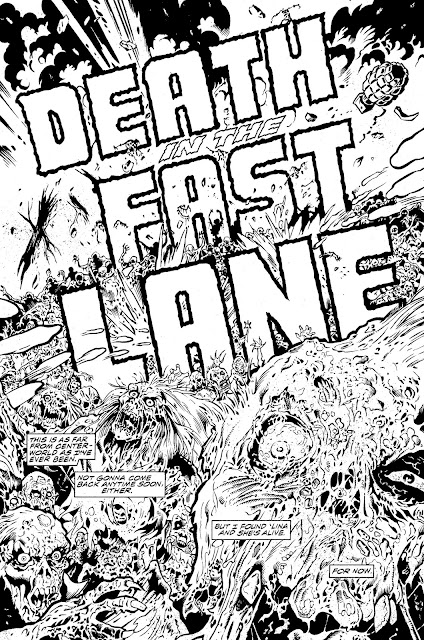 His complete and utter lack of ego (or id or super-ego) can complicate working with him. He’ll bring everything he has to the table and take no credit for any of it. I’ve written hundreds and hundreds of stories for countless artists but no one, not ONE, inspires me to write the kind of stories that ’s work brings out of me. To write a story to challenge the limits of his imagination engine is to challenge the north face of the Eiger. I find that I have to dig deeper to create a scenario for him. I always felt that to do less than my best, to let my musings go lazy, on a story meant for him was to waste an opportunity.  And at the same time gives all laurels to everyone but himself. He denigrates his own contributions. He’s sometimes reluctant to present his ideas so as not to overstay his welcome.


As an example, I brought him on board the Iron Ghost project as a designer and cover artist because I knew he’d strike exactly the right tone for the series. It’s a noir-ish tale of a masked vigilante dealing out justice in the Gotterdammerung of Berlin just before the fall of the Third Reich. loves his pulp and has a vast knowledge of WWII weaponry and uniforms. Just in his notes and model sheets he provided two historical details that completely changed the way I was looking at the series. Two simple suggestions added depth and purpose to the story as well as dramatic twists and a suspense element. I could have scoured a shelf-load of books and not run across the information simply threw away in passing.


Though he so often denies it, he has a passionately curious nature that drives him to learn more about his craft and incorporate what he’s seen into his work. 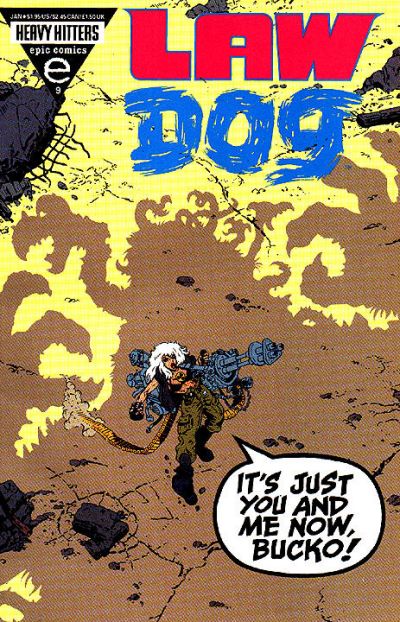 For those of you who like your artists iconoclastic and mythic this is one-stop shopping. Just like his work is no cookie-cutter creator. His personal style is as hard to pin down as his artistic one. He’s a charmer and a curmudgeon all at once and to hang with him is to become an extra in his production and you gladly surrender the lead to him. A drive to the mall turns into an experience. To watch him work a room, any room, is to see a master at work, a throwback boulevardier, a lounge lizard with the gift of stream of consciousness gab. The ideas and gags fly from his head in a seemingly endless spree all delivered in that late-night radio voice that he’ll hate me for mentioning.


What you see on paper is all that energy captured at the moment; frozen on paper and seemingly rifted and improved. That belies the work and re-work and hours of research he’ll put into even the simplest drawing.


The book you hold is long over due. It took Sal an age to pry these drawings from ’s hands. A book dedicated to himself? The man resisted that idea bigtime. Who’d want a book dedicated to Flint Henry? You would. I would. Any old pro or young snot who’d like a peek into the mind of genius would.


Well, I’ve embarrassed him enough. Move on from here and ogle my pal’s work.


somewhere on the Redneck Riviera 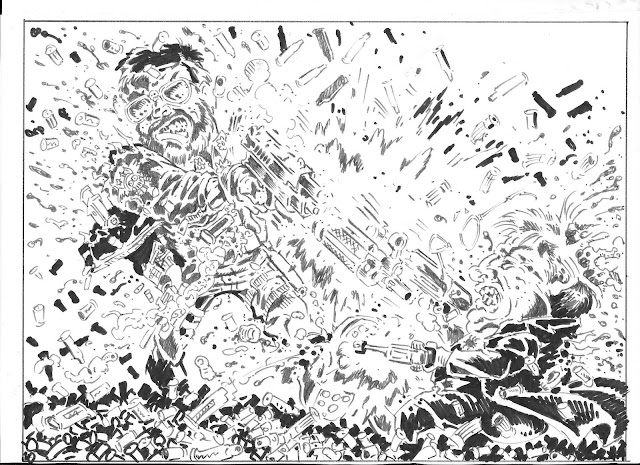