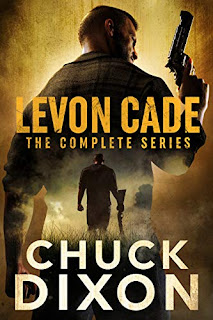 The LEVON CADE OMNIBUS complains the complete adventures of Levon Cade between two (digital) covers, all for one low price!

CLICK HERE to get LEVON CADE: THE COMPLETE SERIES for your Kindle!

Or if you prefer paperback.... 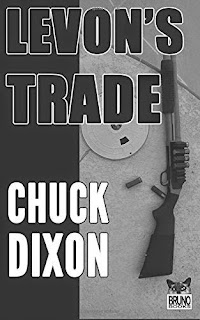 BOOK 1: LEVON’S TRADE
Levon Cade left his profession behind to work construction. He just wants to live an anonymous life and be a good dad to his daughter…but when a local girl vanishes he’s asked to return to the skills that made him a mythic figure in the shadowy world of counter-terrorism.
Levon’s hunt for the missing college student takes him to the heart of a vicious criminal conspiracy and his actions create a chain reaction that threatens all he holds dear.
It’s time for him to return to his trade.
And Levon’s trade is death.
CLICK HERE to order a paperback! 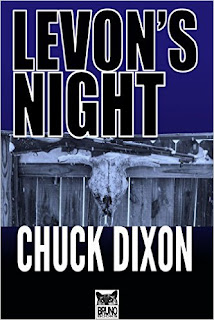 BOOK 2: LEVON’S NIGHT
A gang of vicious criminals hunts the world over for a cache of hundreds of millions in stolen currency. Their search brings them to a snowbound community in the dead of a Maine winter.
They came one night to torture, rob and kill.
They picked the wrong night.

Levon's Night.
The second entry in Chuck Dixon's series of Levon Cade thrillers throws the man of many skills into the middle of a billion dollar heist. This time his daughter Merry shares the danger with him as the two must do whatever it takes to survive against the elements and a crew of murderous thugs.
CLICK HERE to order a paperback! 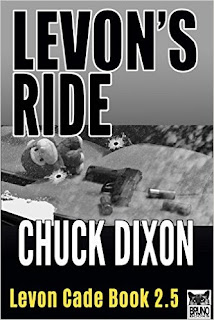 BOOK 2.5: LEVON’S RIDE (KINDLE EXCLUSIVE)
They could steal any car, anywhere, anytime...
But they should never have stolen Levon’s Ride.

Levon Cade returns in this relentless novella of retribution.

Levon and his daughter Merry are on the run. When their SUV is taken off a mall parking lot, it’s up to Levon to find it. The car means nothing to him but the million dollars in cash and uncut diamonds that are hidden in it mean freedom for Levon and his little girl. He uses his skills and courage to uncover a widespread network of thieves and invite the wrath of a local gang.
CLICK HERE to get it on Kindle! 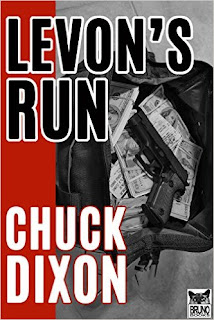 BOOK 3: LEVON’S RUN
HEAVEN HELP ANY MAN WHO STANDS IN THE WAY OF LEVON’S RUN.
The FBI, ATF, Homeland Security, and police from seven states are on the trail of Levon Cade and his daughter Merry. More vigilante action with man-killer Cade as he leads his pursuers into the heartland, where he means to lose them forever.

But his plans turn to a desperate fight for survival and he enters the shadowy world of human traffickers.... 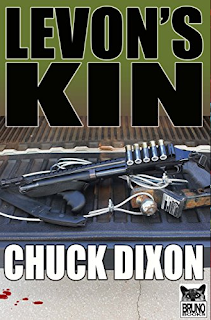 BOOK 4: LEVON’S KIN
On the run from the law, Levon Cade and his daughter Merry head back to the hills and hollers that Levon once called home.
But his return opens old wounds and tears brand new ones when a man from his past involves him in a deadly game. A gang war erupts in the high country with Levon and those he loves caught in the crossfire. A massacre in the deep woods leads to an underworld manhunt for those responsible. Soon the scenic mountain roads are awash in blood as the body count rises.

His back to the wall, Levon is not about to back down or give up ground.

Because this time it’s family....
CLICK HERE to order a paperback! 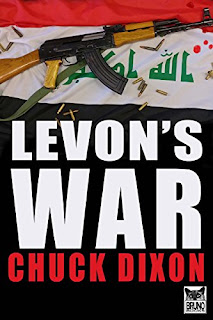 BOOK 5: LEVON’S WAR
His word is his bond.
A promise made in the past takes Levon Cade from the hills of Alabama to the caliphate of ISIS.The US Marine turned backwoods vigilante returns to the Iraqi desert on a mission of mercy that will take him to the heart of terror.
It will take all his skills, all his courage and all his will to survive the hell that Mosul has become.
It’s time for Levon’s War.