Mix one part Army Rangers, one part time travel, and a whole lot of action – and you have the recipe for BAD TIMES, the original science fiction series from New York Times bestselling author Chuck Dixon. 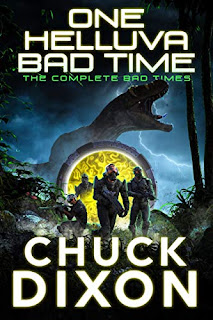 ONE HELLUVA BAD TIME complains the complete Bad Times saga between two (digital) covers, all for one low price!

CLICK HERE to get ONE HELLUVA BAD TIME for your Kindle!


Or if you prefer paperback... 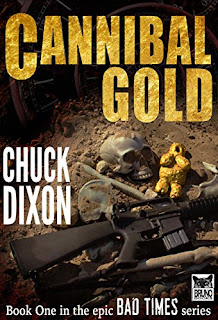 BAD TIMES BOOK ONE: CANNIBAL GOLD
Four men. Four Days. For the fight of their lives.
It was just a walk in the desert to a place 100, 000 years in the past. They thought they knew what to expect… but they were wrong. Now a team of scientists is trapped in a world they were not prepared for and can never return from.
Their only hope lies in quartet of former US Army Rangers willing to travel to prehistoric Nevada and face unknown horrors and impossible odds bring them home from Bad Times.
CLICK HERE to purchase a paperback copy. 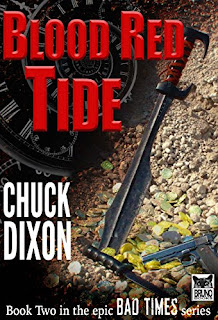 BAD TIMES BOOK TWO: BLOOD RED TIDE
Treasure is when you find it.
The Rangers have returned from the prehistoric past to find themselves in an even more dangerous time—the present.
Being on the run takes money. On the run from the richest man in the world takes millions.
From a forgotten cave in the Nevada desert to the pirate-infested seas of the ancient world, the Rangers hunt
for treasure lost to time. The travelers to the past find once again that history is not what it seems and the future
is always in doubt.
CLICK HERE to purchase a paperback copy. 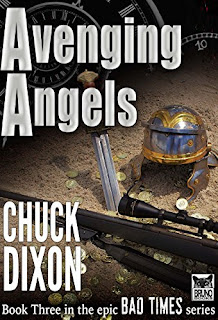 BAD TIMES BOOK THREE: AVENGING ANGELS
FIVE AGAINST AN EMPIRE.
They travel to the past to save the future. To fix a man-made paradox that threatens to alter mankind’s destiny forever, the Rangers must defy the legions of Rome at the height of their power.
Their mission: to rescue one man from slavery in order to free the world.
An adventure that spans two millennia takes them from the days of the Caesars to the siege of a city in the path of total war to a nightmare world of a possible future in which civilization is reduced to an anthill. It all comes down to them as they become Avenging Angels.
The Rangers travel back in time through the Tauber Tube to Roman era Judea to save a man who will change the world for the better with his presence and for the worse with his absence! Their most intense, bloodiest and momentous adventure yet!
CLICK HERE to purchase a paperback copy. 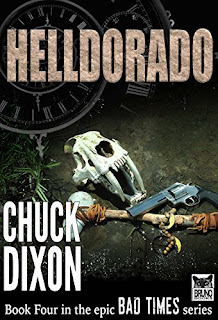 They left a man behind. 100,000 years behind. Another chapter in the popular time travel thriller series Bad Times by bestselling author Chuck Dixon. Lee, Jimbo and the rest of the hard-fighting Rangers go back to prehistoric Nevada to find the man they left behind on their first mission.

This epic quest brings them into dangerous encounters with giant predators long extinct. But the most dangerous of all these animals is man.

Back in the present, one of their team is abducted by a mysterious billionaire seeking to grow his fortunes with the use of the scientific miracle known as the Tauber Tube. Also, their benefactor from the future shares a startling secret.
CLICK HERE to purchase a paperback copy. 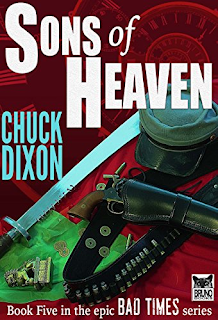 
The Rangers step back into the bloodiest civil war in history all at the orders of a man they’d rather see dead. Somewhere in an empire tearing itself to bloody shreds lies a secret worth killing and dying for. Lee, Chaz, Jimbo and the rest are willing to do the former and struggling like hell to avoid the latter.
CLICK HERE to purchase a paperback copy. 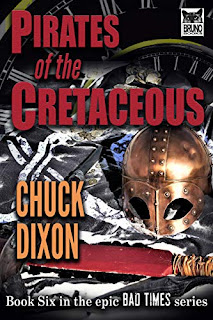 
Trapped in a prehistoric hell, the men (and woman) of he Ocean Raj will need all their courage and all their intelligence to escape back to the present. The latest volume in Chuck Dixon's epic Bad Times series finds the Rangers separated from each other and the ones they love by thousands of miles and millions of years.