Robin Redux. I get offered a Batman title (sort of).

It was 1990 and my career was breaking wide. I was scripting Alien Legion and various other projects for Epic as well as beginning my contributions to Punisher and Punisher War Journal. I was winding down my participation in Savage Sword of Conan but writing lots of scripts for independent publishers like Eclipse, Apple and Now.

I get a call from my buddy Tom Lyle. We’d worked on Skywolf back-ups and created the superhero title Strike! For Eclipse. Tom was at DC under an exclusive contract. He called to tell me that Denny O’Neil was very interested in having me write a mini-series featuring Tim Drake, the new Robin. In fact, they wanted both of us to come up to the DC Comics offices the following week to talk about it.
To say I was surprised is an understatement. My last contact with Denny was less than stellar. As a freelancer I regularly made the train ride to New York to visit Marvel. I always thought it was good to show up now and then to fly my own geek flag. I usually came back with an assignment or two. My visits to DC were less frequent as I had never worked there and only knew one editor at the time.
But years earlier, probably on the urging of Larry Hama, I made a point to stop by DC. You could still “stop by” in those days. Just ride right up the elevator and follow someone in.
Anyhow, I end up in Denny’s then-closet-sized office. Really, it’s like just room enough for two desks and a stack of flat files. Scripts (we still printed them up then) are stacked everywhere along with art boards and the endless piles of comp comics. The meeting is weird because Denny mostly sits at his desk in the rear of the office pretending to be busy with something while his then-assistant Dan Raspler handles my interview.
Raspler.
But I digress.
Anyhow, Dan does all the talking often referring to Denny in the third person as if the Denster himself is not sitting six feet away from us feigning interest in something on his desk. Raspler immediately dashes my fanboy dreams by telling me that there’s no chance in hell I’ll get to write Batman. I’m not fazed as I had no intention of submitting anything to a Batman title as I know that was a pipedream. I share this with Dan (and Denny actually heard me say this as I learned later and filed this knowledge away) and explain that I realize that I may never get to write Batman no matter how long I write comics. My dreams were not tied to a character but to the medium.
I don’t remember what I proposed. In those days you didn’t pitch so much as scrounge for properties that they might be willing to listen to a proposal for. The standard line was, “Come up with a good idea for the Challengers of the Unknown.” I heard this from at least one editor every time I went up to DC. I realized after a while that it was some kind of inside joke. Like sending a kid to get water and giving him a bucket with a hole in the bottom. As far as I know, no one but Kirby ever came up with a good idea for the Challengers of the Unknown.
Anyhow, I never get to speak to Denny beyond a thank you from me and a nod from him. I leave as I came, empty-handed and head down to Marvel where things were happening for me and the editors would actually look me in the eye.
Of course, I got to know Dennis O’Neil much better in later years. But at this time he was an enigma to me. According to many others I got off lucky that day. Denny is an extremely shy guy and it can come off as rudeness. But rile the guy up and it’s Alfred bar the door. He’s a complex dude. It’s hard to know his mind sometimes. Only once you are in his good graces he cannot do enough for you. He was that rare editor of a bygone era, he looked out for his people.
In any case, now I have the summons to come see Denny once again and I have no idea what to expect. Tom is excited because he’s only been at DC a while and they’re offering him a chance to get in on the Big Show. Batman. Even if it’s only the Boy Wonder it’s still an entrée into Gotham City. He’s a one-man rah-rah squad on the train ride up. We both lived in Lancaster, PA at the time and could take a straight shot two-hour train ride right to Manhattan.
We get to DC and we’re ushered into Denny’s presence by his new assistant; a good-looking guy who looks like he could join the Brat Pack. This is my first encounter with Kelley Puckett. He seems like a very nice guy who laughs at our stupid jokes and serves Denny’s every whim with the ease and aplomb of a Jeeves to Denny’s Bertie Wooster.
Denny gives us some background. He explains that he picked me off the comic book back bench because of my writing on Airboy. It’s a shock to me that Denny read a comic of mine and I send up a silent ‘thank you’ to Dean and cat for sending comps to DC. (all the publishers shared complimentary copies of their comics back then) He says that he likes how I handled a young character and feels I’d be a good fit for what Alan Grant has already laid down based on Marv Wolfman’s original intro of Tim Drake. 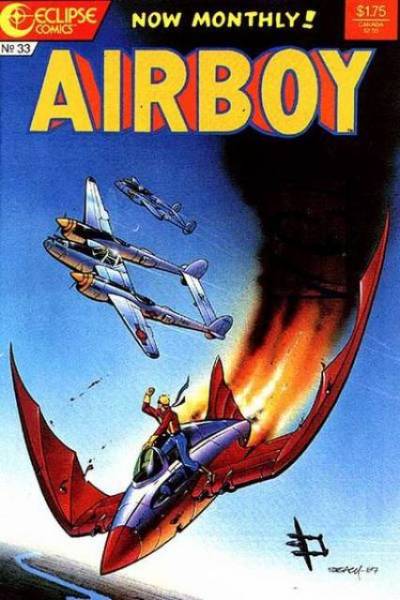 I readily admit, because I feel it’s best to be honest (what I dope I am!), that I have no idea how to approach the concept of Batman’s sidekick. I told the room that I’d been reading Alan’s stories and really enjoying them. But I wanted to make sure that I had something to contribute before agreeing to write anything.
It was Denny’s turn to be surprised. Here he was offering me the keys to the kingdom of all things Bat and I was saying that I needed to think about it. Not for the first time did he say to me (or about me) that he’d never met a freelancer like me before. But I wasn’t about to take on a big project like this and fall flat on my face. If I was getting a shot at a Batbook it was going to be my very best effort or nothing.
The Man who Saved Batman then explained to me The Trinity of Batman.
“There’s Batman, there’s Alfred and there’s Robin,” he said. “Without his butler and his boy sidekick, Batman is not Batman. He’s a lonely psycho leaving his mansion each night to play dress-up. He’s not grounded. There’s no humanity in him. There were no emotional stakes.” I’m paraphrasing here. But imagine an avuncular guy saying the above real slow as though speaking to a child and you get the idea.
My mind opens up, sunshine streams in and, as quick as that, all my fanboy notions of a loner batman being preferable are swept away. What he’s saying make sense and I tell him so.
“Looking back, I can see it now. All of my favorite Batman stories have Robin in them playing a key role,” I said but probably not as articulately as I’m mis-remembering here. I then list what are honestly some of my favorites. “Strange Costumes of the Batman” “Robin Dies At dawn.” That one with the Neal Adams cover where Robin is literally melting away in Batman’s arms.

I then asked what they expected from this new Robin. And I asked why they thought Jason Todd failed as a replacement for Dick Grayson as Robin. Denny explained that Jason Todd was a character that simply “got away from them.” Readers rejected his rebellious nature. Perhaps he reminded them more of the school bully. For whatever reason they did not relate to him. And this was I the days when comics had many more casual readers than they did today. Much of the circulation was made up of consumers who wanted comics they liked to read and would not abide a title out of character loyalty. THIS was not the Robin they wanted. And no matter how much editors and writers tried to re-wire, rehabilitate and even re-boot him, Jason Todd was an albatross dragging the franchise down.
This Robin, Tim Drake, HAD to be relatable. Bottom line, readers had to LIKE him.
So, we go to lunch. It’s Denny’s pick so it’s an Indian buffet. We fill up on vindaloo and head back to the office for a bit of this and that. I promise Denny that I’ll be back to him in two days with my answer. I assure him that I really appreciate the opportunity but it all relies on me coming up with a plotline that I feel good about. There’s no way I can make this a second-best effort.
Denny actually smiles. Denny’s not a gladhander. If you get a smile or a laugh out of him it’s for real. They’re all the more rare because I’m not sure he’s listening all the time. Listening is the one thing Denny fakes like a master. But then, what successful writer doesn’t become skilled at the art of pretending to listen while his mind is a million miles away chasing space pirates through the rings of Saturn?
On the train ride home Tom is almost bouncing on his seat. He wants to know what I’ve come up with. I Barton Fink him. I tell him I’m not comfortable with talking about a work in progress. I don’t even take any notes like I usually did on those rides home; ideas fresh in mind from discussions with editors. I keep changing the subject on poor Tom. I think he was concerned that I’d punt this one. I assure him that, even if I didn’t write it, he still had the assignment.
Tom, bless his heart, told me that he really wanted to work with me. He was sure that we could come up with the winning formula to make the limited series successful. That would, in his mind, open the gate wide for us to do more Batman stuff. Tom was thinking ahead and his strategy turned out to be a good one. I was only thinking about what was in front of me, a five issue, self-contained story featuring an iconic character in a brand new solo adventure. Tom was thinking for both of us, seeing a future where we really made our mark on Gotham City.
He was half right.
NEXT: What to do with the Boy Wonder 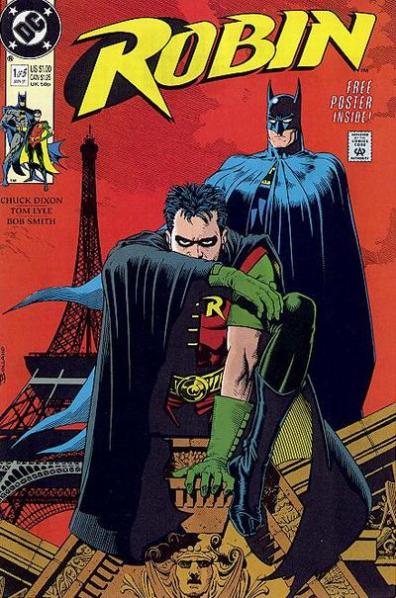