What’s a screwball comedy?
It’s generally considered to be a sub-genre of the romantic comedy. Its gilded age was the late 30’s to late 40’s. The screwball was usually a “guy gets girl” story featuring characters who were rich and privileged. There’re lots of theories about why these comedies about the wealthy sprang from the Great Depression. I think it was pure escapism. Everyone was worried about money and they wanted to visit a world where cash wasn’t a problem. For the most part the people who populated screwballs were concerned about loftier things like love or paleontology. They existed in a world where their greatest fear was social embarrassment. 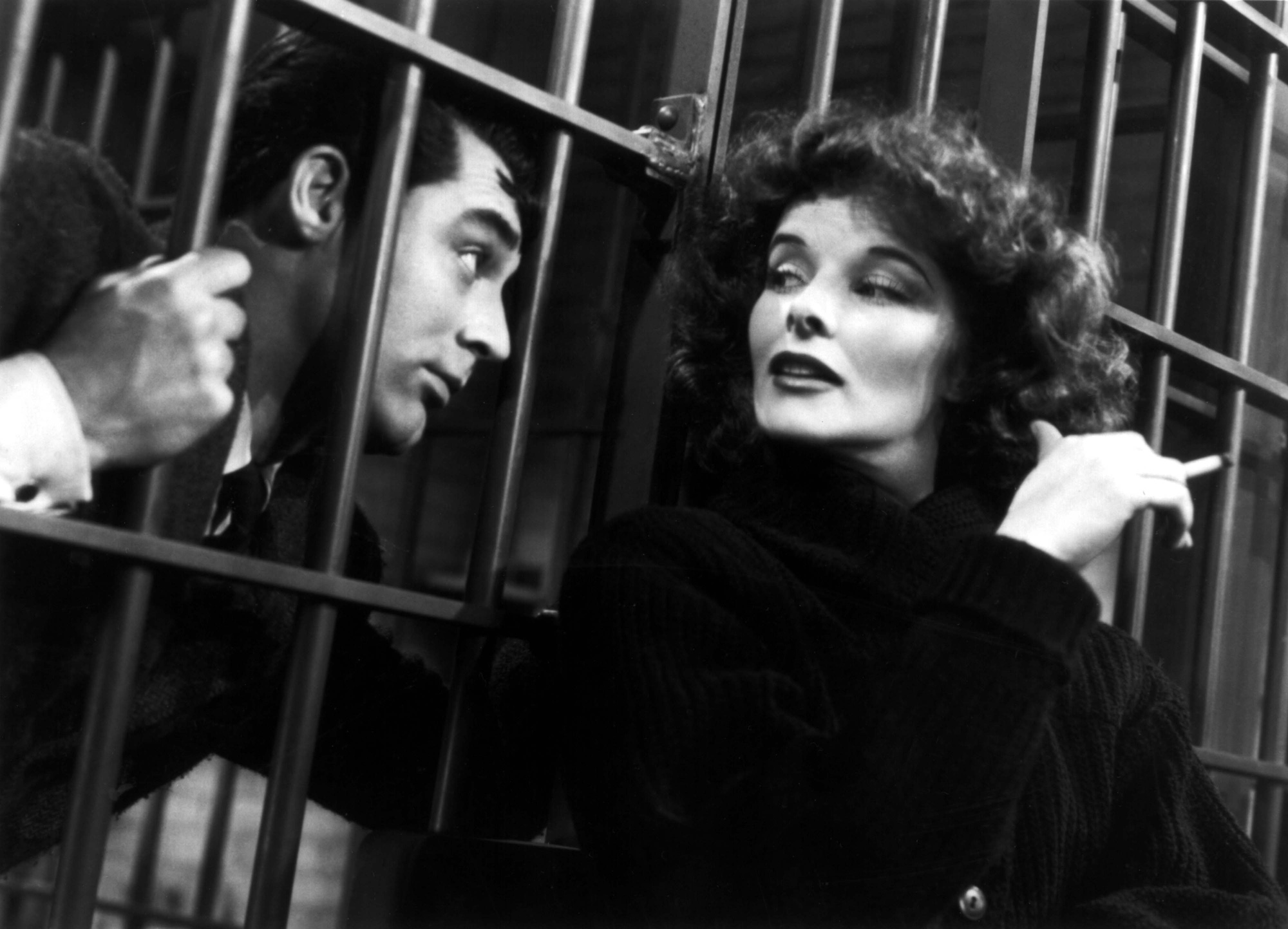 BRINGING UP BABY
The quintessential screwball. A movie with nothing on its mind but to entertain. Howard Hawks and Cary Grant were on a creative and box office roll following His Girl Friday and Only Angels Have Wings when they came onto this project. Katherine Hepburn was in a career slump and looking like box office poison when this role rescued her from obscurity. Hepburn plays a Main Line Society girl who has the hots for paleontologist Grant. All wants is the intercostals clavicle that will complete his brontosaurus. All Hepburn wants is to remain in his company long enough to get him to fall for her. Add in a runaway leopard (make that TWO runaway leopards) and you have the classic screwball comedy. This one is so seamless that it takes multiple viewings to see how Hawks and his screenwriters strung it together in a series of comedy set pieces that blend one into the other with nary a ripple. Brilliant entertainment.

THE MIRACLE AT MORGAN’S CREEK
A Preston Sturges classic considered risqué when it came out in ’44. The always hilarious Betty Hutton stars as a girl who volunteers to help entertain a bunch of G.I.s being transported through her small town on the way to the fighting in WWII. She does more than entertain one of them when she finds herself waking up in the morning with a wedding ring and no recollection of who the bridegroom was or where and how she got married! Worse yet, it turns out she’s pregnant! (though the “p” word is never used in the movie.) She turns to her oldest pal in town, Eddie Bracken who specialized in playing affable 4-Fs left out of the service in a handful of pictures. Bracken is nearly forgotten now (he had a pivotal role in Home Alone 2 as the toy shop owner.) but in his day he often played a character driven more and more frantic by the events swirling around him. Bracken’s ability to reflect rising mayhem with his three octave voice and endless expressions of shock and dismay are unparalleled. He’s the loveable victim. Always credulous but never naïve. On hand also is the Strurges regular William Demerest who’s at his most flammable in this picture. He’s a tower of simmering rage and always funny. 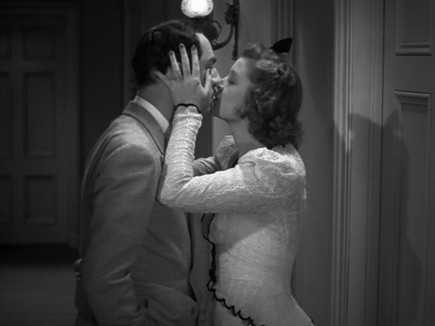 I LOVE YOU AGAIN
William Powell and Myrna Loy in one of their incomparable pairings. Directed by S.S. Van Dyne, their frequent collaborator and director of most of the Thin Man movies. Powell is a man with amnesia. Or at last he HAD amnesia until it’s cured and he remembers that he’s a confidence trickster who’s been living a life as a milktoast middle class business man for the past ten years. And he can’t REMEMBER the past ten years. He follows the clues to a small town a pottery business he runs. It’s the perfect set-up for a confidence man and he plans to rob the business blind and take off with the proceeds. Until he meets Loy, the woman he’s forgotten he’s been married to all these years, and falls head over heels for her. But she wants nothing to do with Powell as he’s just a boring old stick-in-the-mud. But she only knows the amnesiac Powell not the smart and dashing con man he is in reality. Can William woo Myrna without revealing his sordid past? Or should he just take the money and run? A dizzying story of mistaken identity and lost memory. MR AND MRS SMITH
Alfred Hitchcock’s only straight-up comedy. Robert Montgomery and Carole Lombard learn that their marriage of eight years was illegal and they’ve actually been living in sin all this time. makes the bonehead play of not telling right away and this sets off a calamitous chain of events that threatens them ever making their marriage legal. is hysterical in several sequences in which he goes to great lengths to avoid humiliation only to compound his embarrassment.  is, as always, irresistible in a role that allows her to act childish, demure, seductive and sly often all at once. She’s not only cute but she’s funny when she’s angry and she’s angry a lot in this one. It also features Jack Carson in the supporting cast. If you’re not familiar with Jack Carson you should be. He was often the best thing in the movies he appeared in. He specialized in playing shallow braggarts who were honest, goodhearted lugs despite their self-centered natures. The dumb jock, the best buddy, the dimwitted schemer. The closest modern equivalent would be Patrick Warburton. is ALWAYS a scream. 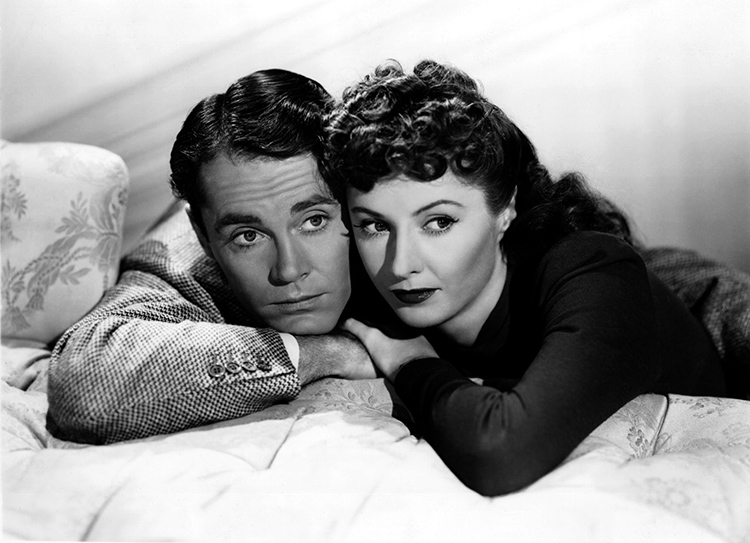 THE LADY EVE
Preston Sturges wrote and directed this story of a father and daughter confidence team played by Charles Coburn and Barbara Stanwyck. Babs is slick and sexy and overpowers a withdrawn and wealthy nerd played by Henry Fonda while both are on a cruise voyage. But they meet again under other circumstances and Stanwyck falls for Fonda but she has to convince him that this time it’s for real. Real romantic tension grows to a suspenseful level in a comedy with true edge and heart. Smart and sophisticated with a great performance from blustery Eugene Roche.
This movie is also remarkable for its innovative warping of the usual romantic comedy formula in a way that has never been duplicated. Sturges has Stanwyck's character go through one metamorphosis after another as regards her feelings for Fonda. And Fonda's character responds to these changes with transformations his own all while each remain seamlessly in character with zero contrivance. 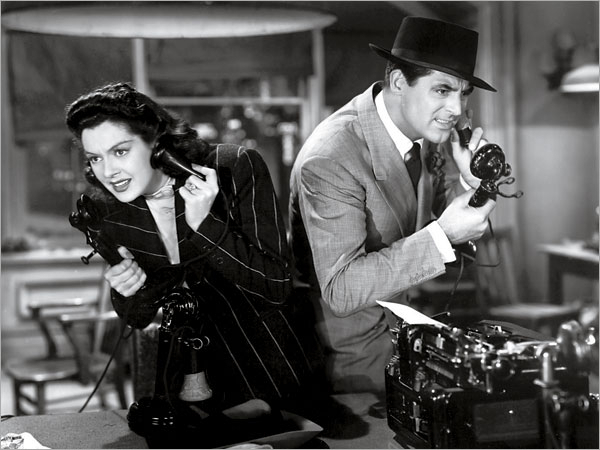 HIS GIRL FRIDAY
Howard Hawks convinced writers Charles MacArthur and Ben Hecht to re-draft their hugely-popular hit play Front Page with one simple alteration; a gender change for ace reporter Hildy Johnson to make her the ex-wife of crusading editor Walter Page. The result makes perfect sense and adds a welcome degree of sexual tension and romantic complication to the story. Rosalind Russell gives as good as she gets from ex-hubby and current boss Cary Grant. Russell is planning to leave the paper and marry stolid and sure Ralph Bellamy. But Grant is willing to turn the town upside down to manipulate her into staying long enough to fall in love with him again. It’s as sharp and cynical a fast-paced comedy you’ll ever see. It bears repeated viewings to catch the full range of the asides and exchanges. In addition to MacArthur and Hecht’s bristling dialogue you have Grant ad-libbing all over the place. Russell was so flummoxed by Grant’s going off the script that she hired an outside writer on her own to come up with quips to shoot back at him! ( caught on and asked if he could see her cheat sheet.) In addition to a classic screwball it’s also still timely in its comments on the state of journalism and media control of public events. 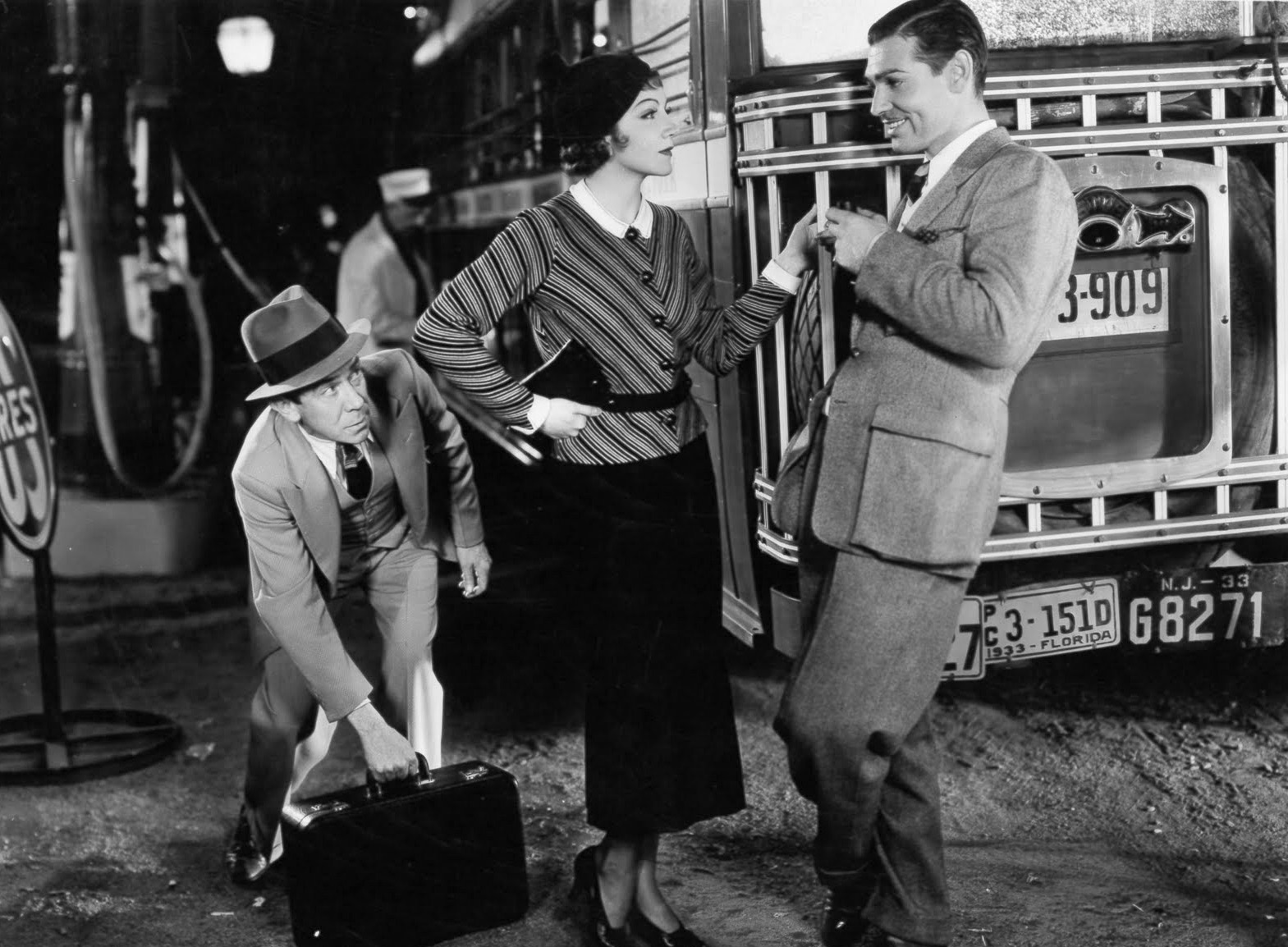 IT HAPPENED ONE NIGHT
Frank Capra directs what is not only one of the great screwball comedies of all time but perhaps one of the five most influential films ever made. The plot will sound very familiar to even a casual filmgoer as it is a mainstay of romantic comedy. Every romantic comedy (and plenty of romantic dramas) owes something to this one. Claudette Colbert is a poor little rich girl who runs away from her father and a huge inheritance to marry a no-good cad. Newspapermen scour the country for word of the runaway heiress. But it’s Clark Gable who finds her and vows to stay by her side to keep his scoop to himself. He hates her and she hates him. He thinks she’s a stuck-up, spoiled brat and she thinks he’s a heartless mercenary who ruins lives for profit. But they’re stuck with one another for a variety of reasons and a series of circumstances that make them fall…well, you know this story. Add a gay boyfriend for the heroine and you have half of the Julia Roberts movies ever made. has been twisting and bending and recasting this story since It Happened One Night swept the Oscars the year it came out. But this is the original and is still unsurpassed for charm, laughs, wit and sophistication. 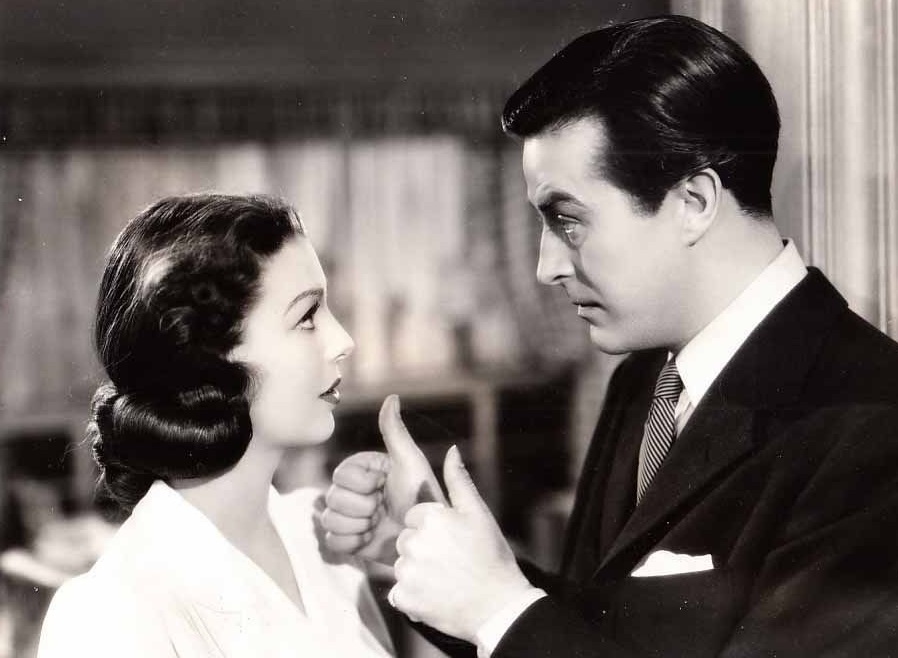 THE DOCTOR TAKES A WIFE
Loretta Young is a bestselling feminist author who thinks both marriage and men are useless. Into her life comes Ray Milland and, through a series of events that could only happen in a screwball, they are forced into a sham marriage.  Her publisher wants her to stay in the phony marriage just long enough to write a books about matrimony before getting divorced. He can't get the academic position he wants as long as he's a bachelor. But, thanks to propinquity, their platonic relationship turns to romance leading to further complications. What's created is a gag-rich environment driven by the irrepressible charm of its leads. 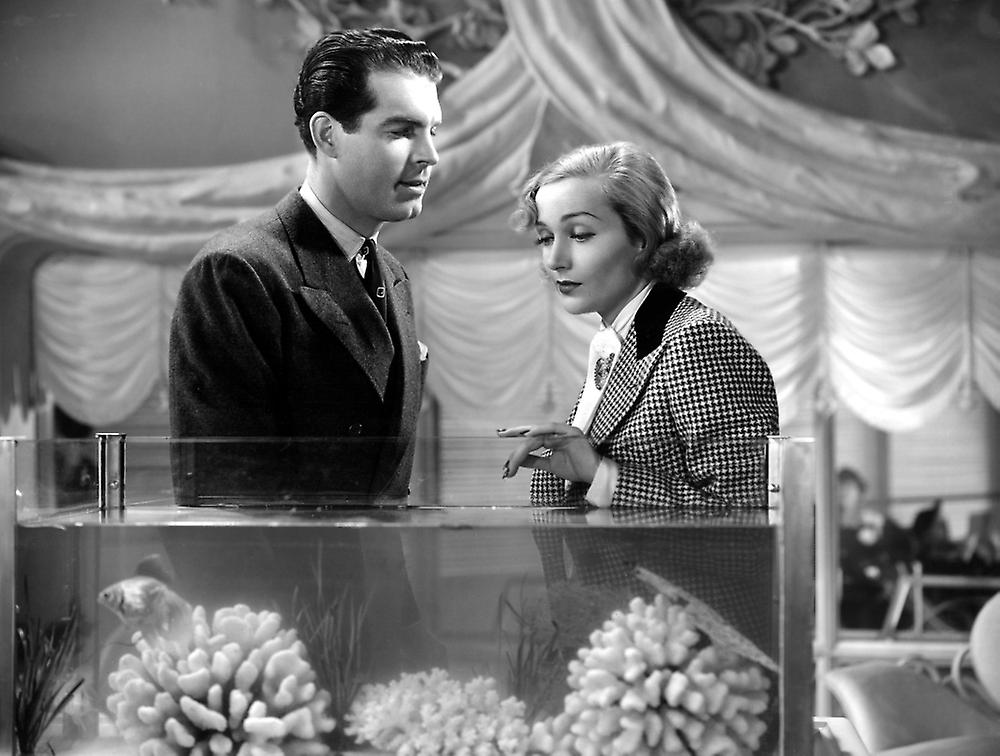 THE PRINCESS COMES ACROSS
No list of screwballs would be complete without at least one Fred MacMurray entry. The actor made a career of light romantic roles teamed often with Claudette Colbert in one effective comedy after another whole both were under contract to Columbia. Here, he stars with Carole Lombard as a wise-talking musician attracted to a foreign countess who turns out to be neither. The action takes place aboard an ocean liner, the setting for more than one of the movies on this list. Comoplicatoon upon complication ensue as Lombard first hides her identity from MacMurray then needs his help to conceal it. Of course, love intrudes along the way to break down the guard of these two cynical, world-weary heels. Throw blackmail and murder into the mix and you have an unbeatable formula for these two star to play against. 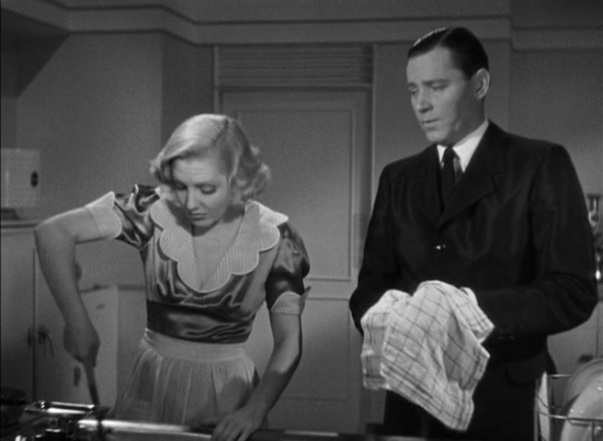 IF YOU COULD ONLY COOK
Jean Arthur starred in a string of screwball and romantic comedies usually playing bachelorette everygirls opposite Ray Milland, Fred MacMurray or Melvin Douglas. Her squeaky tremulous cartoonish voice was certainly unique and added to her sharp delivery and impeccable comedic timing. Here she's teamed with Herbert Marshall who falls for her hard enough to walk away from his millionaire lifestyle to pretend to be an unemployed butler just to stay in her company. The pair take a job as servants to a dangerous gangster played by Leo Carillo with Lionel Stander as his hired goon Flash. All is capably overseen by comedy veteran William Seiter. Another reliable entry from Columbia, the studio that created the genre and returned to the screwball comedy goldmine again and again for more than a decade.