Perfection in comics: the genius of Jack Cole

There's no real secret to the success of Plastic Man. He ran for years in the pages of Police Comics and his own solo magazine and was beloved by millions of readers. The attraction is easy to explain and it all comes down to the unique talents of Jack Cole.

Cole's stories were always wildly manic but tightly plotted. There was a spine to all the madness and silliness and there's no better example of his craft than this story of Plas and Woozy facing off against a caveman gangster. It is simply seamless and pure comics entertainment from first panel to last. 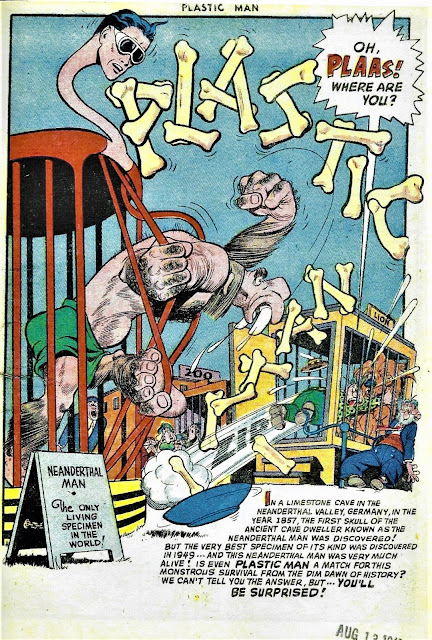 Page one sets up the premise of the story and we see that Cole plays with the Plastic Man logo to make it part of the art much like he did when he worked on the Spirit with Will Eisner. 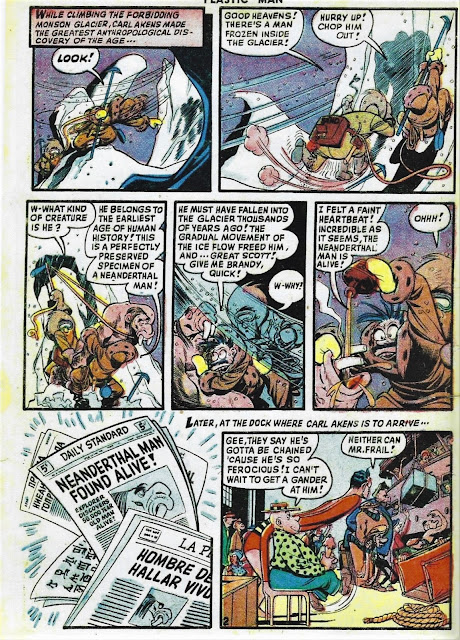 The set-up is marvelous. The mountain climbers and the discovery of the frozen caveman established in these perfectly composed five panels. Pay attention to the climber struggling to keep his purchase on the ice in panel two. These are the little details that Cole infused his work with that made his idiosyncratic cartoon style so animated. 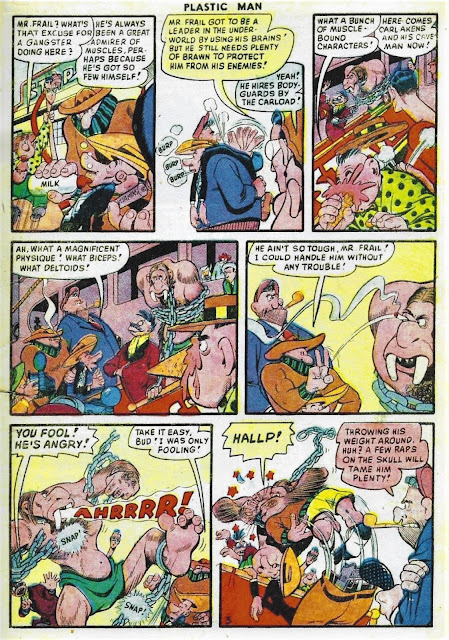 Another bizarre Cole criminal mastermind, Mr. Frail, a thug so weak he's carried around like a baby. Cole loads the page with business. Poor Woozy and his ice cream cone.  The marvelous final panel where the hood is literally yanked out of his weapons-laden pants. 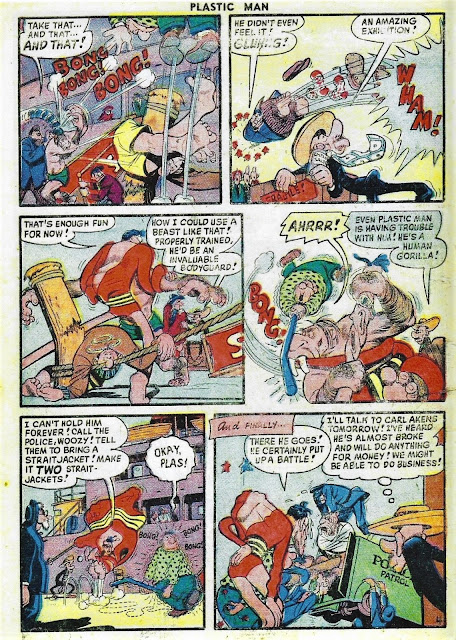 The first of the Plastic Man gags in a story loaded with them.  Cole's inventiveness with Plas' powers was endless and he rarely (if ever) repeated a gag. Here the caveman leaves a lasting impression on our hero and emphasizes the strength of this "human gorilla." Plas usually bounces back from these fights instantly. But here he needs time to recover. 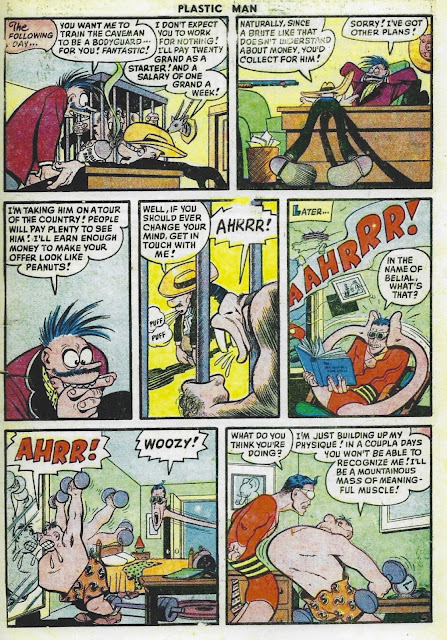 I love the fun Cole has with his boneless pantywaist of a villain. He's literally draped across that desk. Contrast that with Woozy's struggle to become a strongman. Plas' reaction to this in panel six is laugh-out-loud funny. I imagine seeing that much of Woozy would startle anyone. 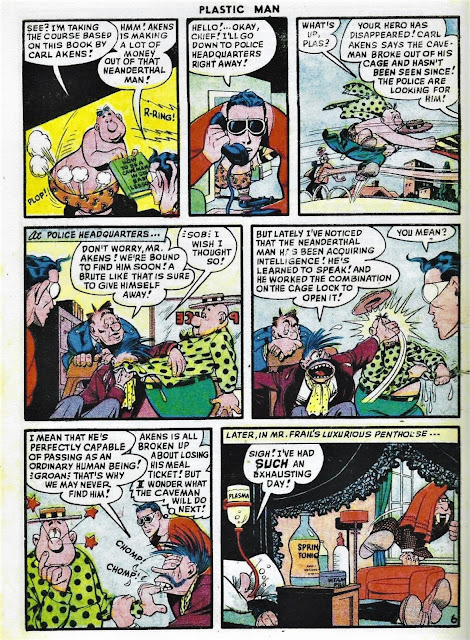 The highlight of this page is the air escaping from Woozy's boxers as he returns to his normal posture. Cole advances the story with a twist. Akens' reaction to the loss of his meal ticket is as overwrought as it is comical and will turn out to be a red herring later on. 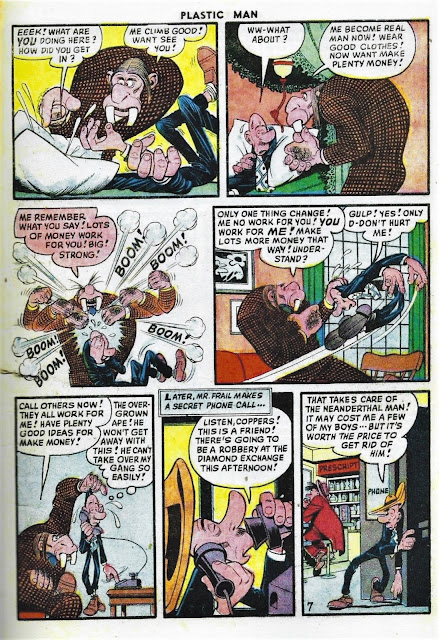 When you reach the end of the story you'll see what a clever set-up this page is. The neanderthal man demonstrates his awesome strength on the weakest character in the story. I stand in awe of what a clever bit this turns out to be in hindsight. 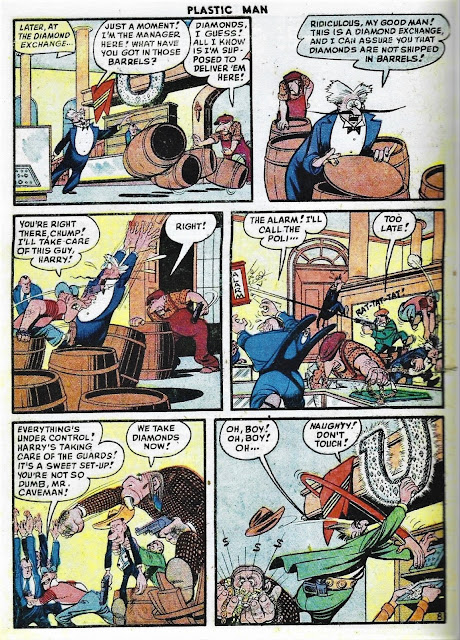 A perfectly staged robbery scene and Plas' inevitable and anticipated appearance in the final panel. So much of the fun of these stories is the bad guys' consternation at the sudden appearance of our hero. Not in this instance, but often Cole would let the reader know that Plas was present for many panels and even pages before the  pliable protagonist would make his presence known. 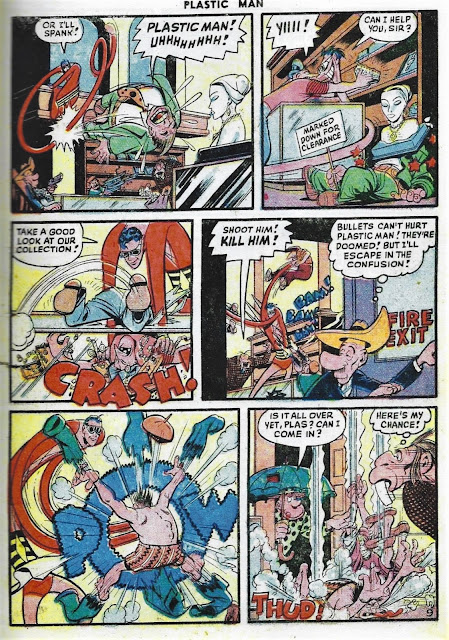 A fantastic action scene that pulls out all the stops. Loads of side gags and frantic violence. the guy getting his clothes punched off is a gem of a panel. Woozy's cautious arrival when the danger is passed is fresh even given that scenes like this were standard fare in these stories. Cole always found a way to re-fashion his own tropes so they never got tired. We delight in seeing them again and again and look forward to repeat gags as Cole put the sweat in each time to make sure they never became stale. 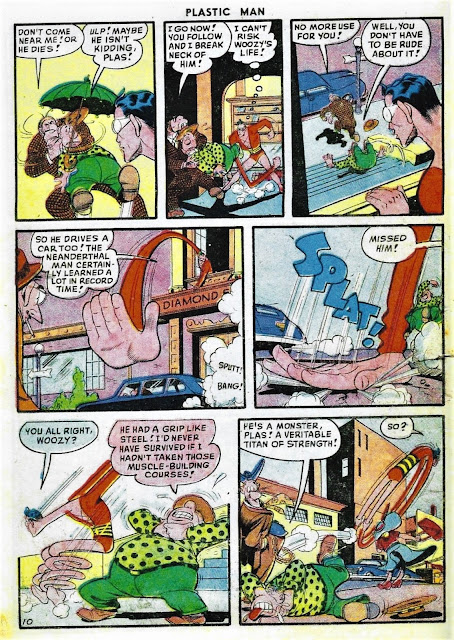 Another solid action page and, once again, the caveman takes on the weakest guy in the room. It's all part of the sly reversal that's coming. That final panel of Plas rolling off as a hoop has action, depth, is funny and all done with a sure economy of line. 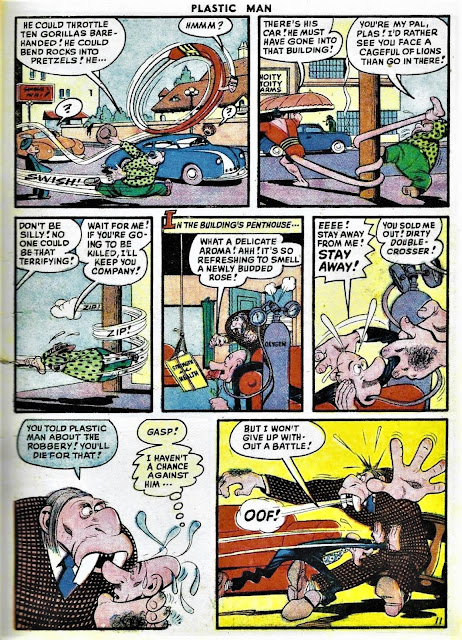 Woozy has some great lines on this page worthy of Lou Costello. The Plas and Woozy action is kinetic and makes perfect sense by the physical laws of the universe Cole has created. And that last panel comes a shocker. 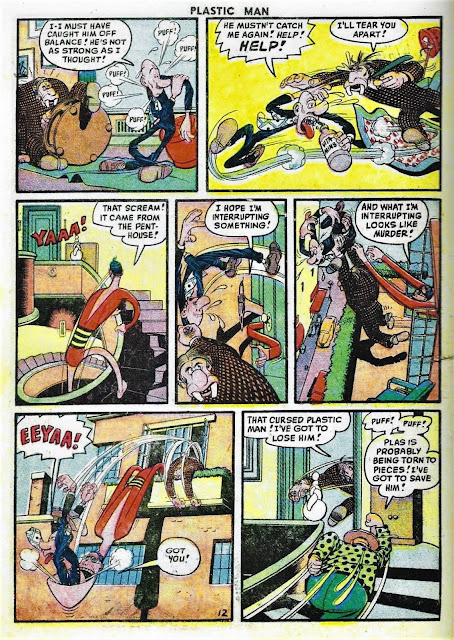 More great action with a three-level chase. Look at the composition of panel six. Cole makes it look so easy but, like the rest of this page, the action occurs with perfect clarity and sense of place.There's real tension here with no action wasted and no opportunity for a gag discarded.  And the Plastic Man gags are fresh and wild. 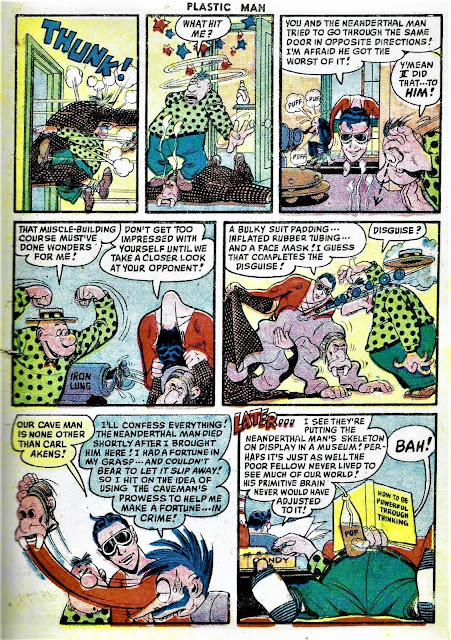 A satisfying and surprising ending. And Woozy, for once, gets to be the tough guy who brings down the villain.
Amazing stuff and a perfect example of comics at the top of their form.