I didn’t know Steve Ditko, and yet I did.
I only met him one time. A conversation I’ll recall till my dying day and one I’m sure he forgot as soon as I was out of sight. Just another overgrown adolescent bowing at the shrine.
But I did know him through his work. And that’s not just using a common phrase. The man revealed himself in the pages of the comics he worked on. He informed his readers of who he was, both the deeply personal and weirdly abstract, right there in four colors.
Ditko is the first name I recognized and first name I followed when I was a kid avidly devouring every comic book I could get my hands on. He’s the first artist I could spot even if I didn’t see his name in the corner of the title page. Low hanging fruit, right? The man’s style was every bit as idiosyncratic as his life.
More than recognition, Ditko’s work had a gravitational pull for me. There was an intimacy to his work that, I suppose, grew from him pleasing himself as his first priority. Here was a guy who cared about the work, was willing to put in more time than they were paying him for. Each assignment was a personal challenge. Here was a guy putting himself into every panel. You could see it. You could feel it. This man was drawing from his own life experience. I responded to that in a big way, comics as a means of personal expression. 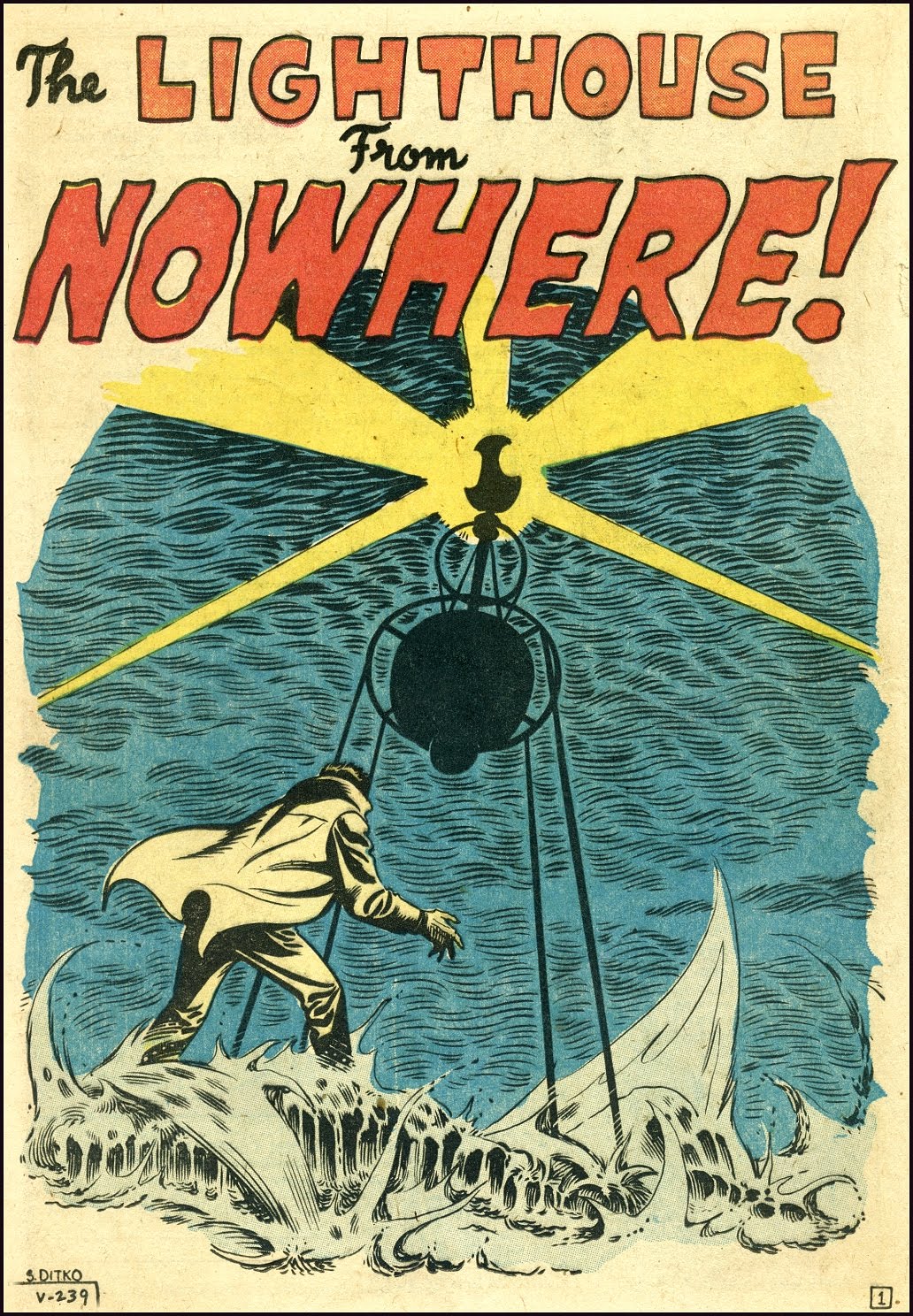 The first stuff I saw him on were those Marvel “monster” comics. While Jack Kirby handled the big hulking alien beasties out to subjugate the Earth, Stan Lee wisely assigned the quieter, more atmospheric shaggy dog stories to Ditko. These were usually Twilight Zone-like episodes reduced to their most basic premise and served up in six-page helpings.
And Ditko applied himself to them to make each one a gem. His approach to the plots was never the same twice. Each would open with a daring and innovatively designed splash then proceed to the action in meticulously drawn curio shops or neighborhoods of houses not quite like the ones in your town, or cyclopean lamaseries high in the mountains of Nepal.
The pages were populated with casts of characters unlike any others in comics. These weren’t stylized mannequins who’d be at home on an advertising storyboard.  These folks were fat, hunched, harried, rumpled, squat, sweaty, emaciated, warty, balding, shriveled and often downright ugly. In other words, real people. Like his old people. You could catch arthritis just looking at Ditko’s seniors.
Above everything else, Ditko brought a level of creepiness to these stories absent in other comics. He was doing them in an era when the Comic Code Authority had a special rancor for anything even remotely resembling a horror comic. No blood, no vampires, no werewolves, no zombies or any other kind of undead were allowed. Overt violence of any kind was frowned upon. So, where the scary? That’s what kids read these comics for.
While Kirby’s big monster stories were driven by the element of “what happens next?”, Ditko’s offerings were most often little morality plays in which the protagonist got his comeuppance from some supernatural source in return for the sins of theft or greed. I remember one where we leave a guy in the last panel being buried under a literal hill of beans. (presumably to be crushed or suffocated) Sometimes characters were left in pitiable isolation or simply alone to reckon with the weight of their own wrongdoings. There was a lot of that in these stories, a sense of isolation, of no longer belonging, a painful alienation. Sometimes these feelings were resolved by happy endings. I recall a particularly moving story about a young girl confined to a wheelchair who we learn is actually mermaid in the final panels. Most often they did not end happily but with a dismal future for the protagonist. 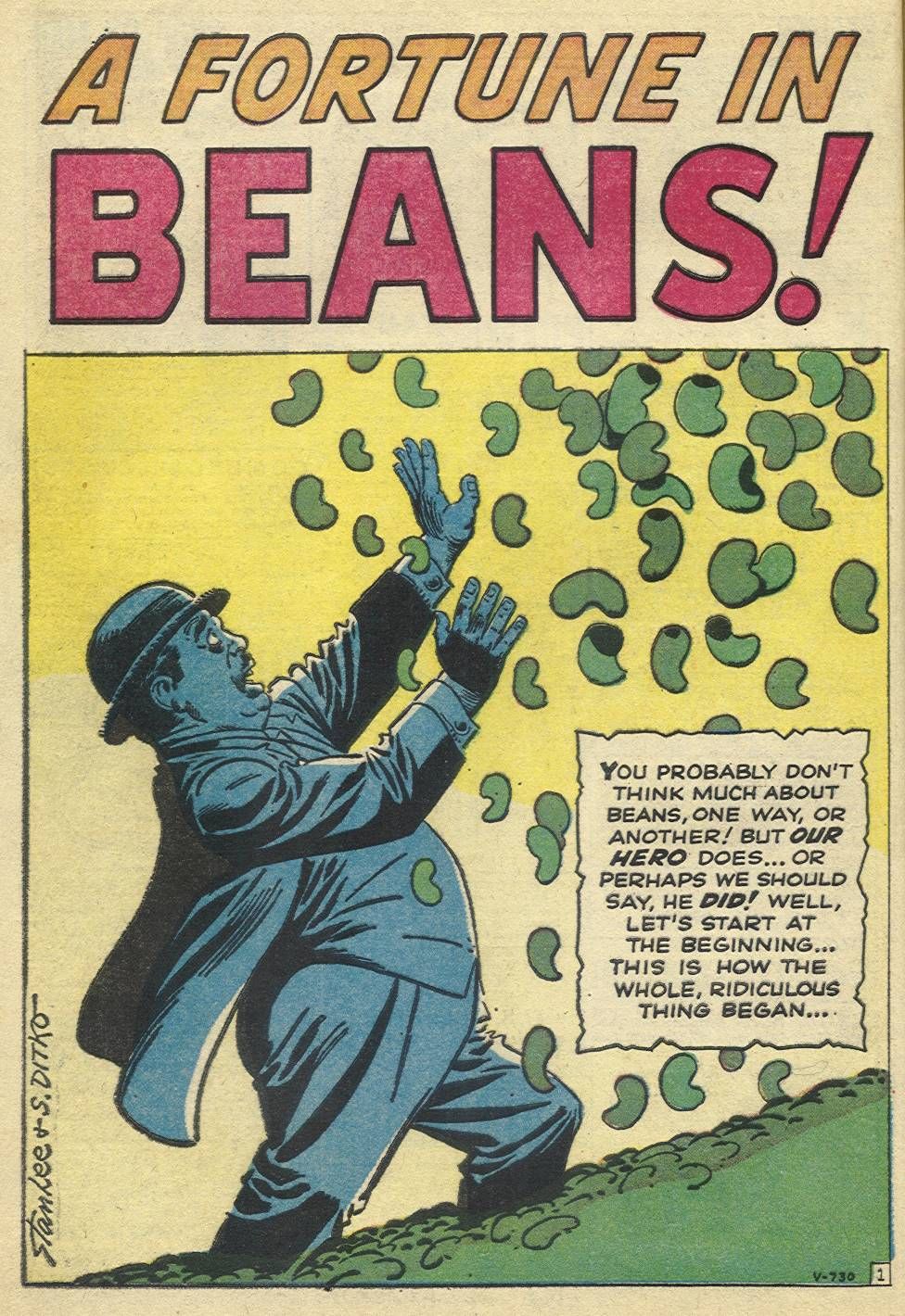 This is the start of Ditko reaching out from the comics pages to tell us about him. And, like every other kid in the world, I had times in my young life where I felt isolated and unwanted. And, like every other kid in the world, I thought my suffering was special. Every child does that at one time or another, searches for the thorns among the roses. I think it’s a kind of trial and error exploration of our emotions, a pre-pubescent plumbing of the depths of our psyche at a time when our psyches are an inch deep and a mile wide.
And Steve Ditko plugged right into that angst, that melodramatic urge to feel special and alone. Though a grown man, he maintained that adolescent mix of despair and enthusiasm that the rest of us couldn’t wait to escape. And I don’t mean that as a slight in any way. He used those feelings, banked them into an ongoing creative blaze, to inform the greatest of his work. How else can you explain Spider-Man, a character more fully realized, more alive, than any other costumed superhero to that point?  Peter Parker’s failures and triumphs and frustration at the injustice of it all came from a mind to which the slights of his childhood and his teenage years were fresh. Sure, Stan Lee had a lot to do with the success of Spider-Man. The snappy dialogue that was actually funny when it needed to be and touching when it had to be. His J. Jonah Jameson rants were always a delight and always crisp. Peter’s inner monologues were often heartbreaking rages against just how rotten and unfair life could be.
But the heart of Spider-Man belongs to Ditko. It always will. Everything that made Peter Parker special begins and ends with Ditko. And in a world of comics where the most interesting character trait at the competition was that the world’s fastest man was always late for his dates with his girlfriend, Spider-Man was very special indeed.

I enter into evidence every Spider-Man story written after Ditko’s departure. There’s something he took with him that Lee was never able to replicate. An honesty, perhaps. Certainly the ability to create indelible villains. But mostly what was missing was Ditko himself. His point of view, his personality was gone. A major part of Peter Parker left with him.
Further evidence can be found in Ditko’s life. A photo of him appears in his high school yearbook from back in Johnstown, Pennsylvania. It shows a skinny teenaged Steve in the science lab holding up a test tube. He’s wearing round horn-rimmed glasses, a tie, and a striped sweater vest. If that didn’t raise the hairs on the back of your arms, all you hopeless geeks like me, standing behind Steve is a big, smiling blonde guy in a varsity sweater.
As a kid, nine to ten years old, I felt like I knew Steve Ditko, really knew him. I felt a kinship with the guy. Yeah, it’s weird. But as much as Stan was working hard to reach out to me with his showmanship style of marketing, it was Ditko who drew me into the world of Marvel Comics. I felt like he got me and I got him. What I was responding to, of course, was the sense of alienation, of otherness, he was so adept at portraying. It was much the same elements that made me such a fan of Charles Schulz at the same age. These two men remembered what it was like to be a kid and were articulating that experience as adults. 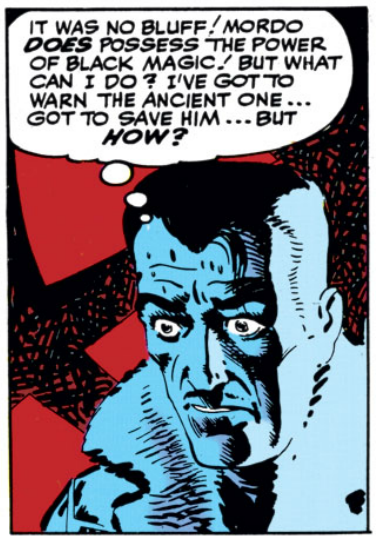 More than just reading his comics, I wanted to emulate Ditko artitistically. I wanted to draw like him. He’s the first artist that I copied and traced. I spent hours and hours tracing to combine elements from other comics to make new Spider-Man covers that had him facing Marvel foes and heroes he’d yet to encounter.
It became clear over time that I didn’t share the kind of talent or discipline to ever come up to his level of craft. So I concentrated more on his storytelling techniques. His choice of angles and devices, how he composed panels and pages to work together to create a whole. I would re-read and re-re-read his stories looking for all the nuances and subtleties that separated him from every other artist in my mind. He taught me comic book storytelling. He taught me how to wring emotion from static images. He’s the reason I write comic books. I work in the shadow of Steve Ditko.
The true test of this kinship I shared with a man I only met through the comic pages came when Ditko departed Marvel.
I was crushed. Devastated. One of the perfect things in my life was now ended, never to return. An integral piece of my childhood was gone. And I was still a child! I don’t recall how I learned this horrible news. There was no fandom then. Not really.  I do recall that, upon learning about his leaving, I took a vow never to by another Marvel Comic as long as I lived. That vow lasted about six years. Blame it on Jim Steranko.
Why did I do that? Why did I deny myself the Fantastic Four and Captain America? Simple. I knew, deep in my heart, as sure as I was about my mother’s love, that somehow my friend and mentor Steve Ditko had gotten the shaft. My idol would never in a million years have left the titles he created (Spider-Man and Dr. Strange) unless there had been some dirty work at the crossroads. This work meant as much to him as it did to me. I was certain of it. Something really rotten must have happened to make him abandon his creations like that.
I’m not going to re-litigate that debate here. But, no matter where you fall on that one, you have to admit that eleven-year-old me was on the money. Ditko had his reasons for leaving and those reasons all led back to a common theme in his work. Injustice.

I followed him throughout his career, of course. But, except for his brilliant efforts at Warren Publishing (most often teamed with writer Archie Goodwin), the spark was gone. He had spent himself on Spider-man. He invested everything he had in Peter Parker, probably looking forward to a decade-long run in the character. And it was taken from him. The creative course of the series was removed from his control, the collaboration dissolved as he was reminded that he was only another pair of easily-replaced hands. Steve Ditko had led with his heart and his enthusiasm. He was all-in on Spider-Man and they made him pay up for that mistake.
Boy, do I know that feeling.
He continued working, right up to the end. He did solid work for DC, Charlton, Tower and, ultimately, back at Marvel where he refused to draw his signature characters ever again. In recent years he continued his own highly-idiosyncratic, self-published comics based on his personal political ideology. He kept his hand in. He couldn’t help himself. An itch he had to scratch. That’s worthy of our respect.
I usually don’t care for remembrances like these that are usually more about the rememberer than the remembered.  You know the kind. “I’ll never forget the day when the departed told me how awesome I am.” But I make this one and only exception to tell my story as it relates to Steve Ditko only because he honestly did mean that much to me and my life and career.
Thank you, sir. Thank you for everything. 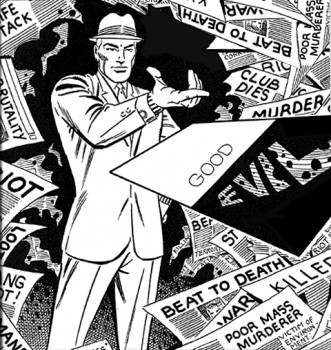