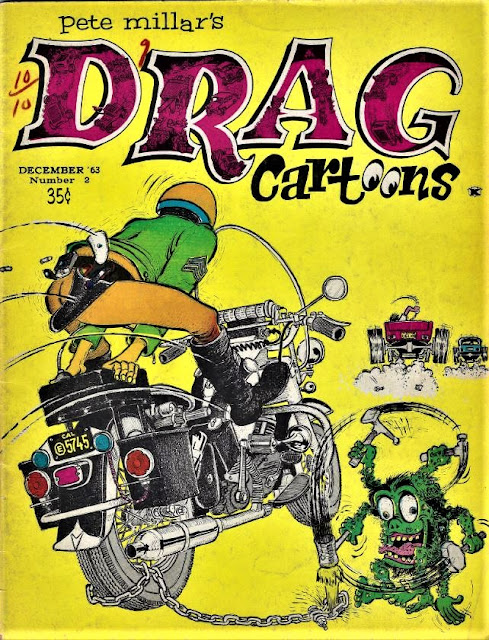 If you're a millennial comics fan all this might be news to you. Maybe you Gen X or Ys might have seen these car humor mags. I'm betting a lot of the boomers here LIVED in these comics. Created at the the height of the California car culture craze, CARtoons, DRAG Cartoons and, eventually CYCLEtoons were common sights on magazine stands everywhere. Rat Fink and the Weird-Ohs were kids kounter-kulture heroes made all the cooler because our parents didn't understand them.

To be honest, other than the gearhead kids I grew up with, mots of us didn't understand the creations of Big Daddy Ed Roth and Mouse and other CARtoonists. But that impenetrability only made them seem even hipper. The jokes were probably only funny to dedicated rodders and grease monkeys. And I suspect they weren't that funny to them.To say the humor was sophomoric is being kind. But when you're twelve, sophomoric seems pretty sophisticated. I mean, jokes about hot girls. Hee hee.

And, looking back on these it's easy to excuse the obvious objectification of women portrayed in these magazines. The females were always unobtainable objects of desire; the heroes of these stories being either motor-nerds or simply romantically inept.

These were the handbooks for the whole fad of building custom car and Weird-Oh models and collecting oil company stickers and decals. The t-shirts, caps, key chains and all the rest of the brick-a-back we HAD to have to be perceived as cool.

The magazines were in publication into the early 90s and I noticed that CARtoons has returned in magazine form and has survived to issue #15 at least. But, over their run, the magazines fell in quality. Particularly in the art area. In those early days they featured the cream of comics creators. Especially from the California-based talents, many of whom worked in Hollywood animation as well as funnybooks.

Alex Toth, Warren Tufts, Russ Manning and Mel Keefer were frequent contributors. The magazine even found its own superstar in Gilbert Shelton who introduced the swine of steel Wonder Warthog in the pages of Pete Millar's publications.

I thought I'd share a few stories from DRAG Cartoons #2.

First up is a beautiful job by Russ Manning that I suspect Russ might have scripted himself. 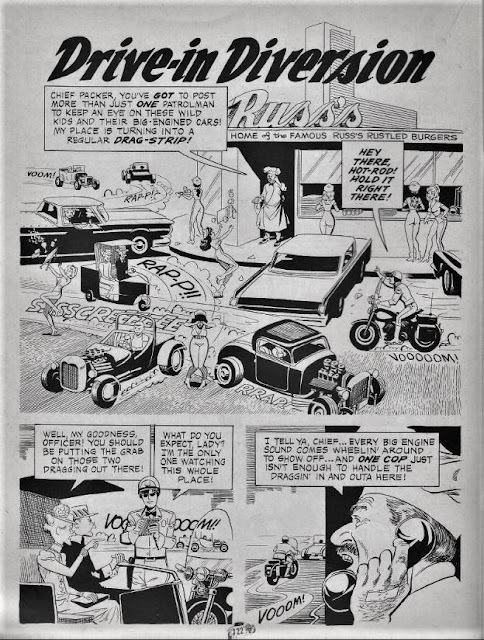 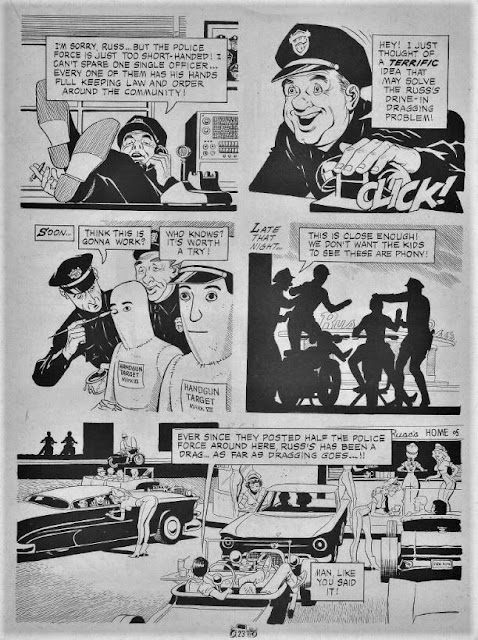 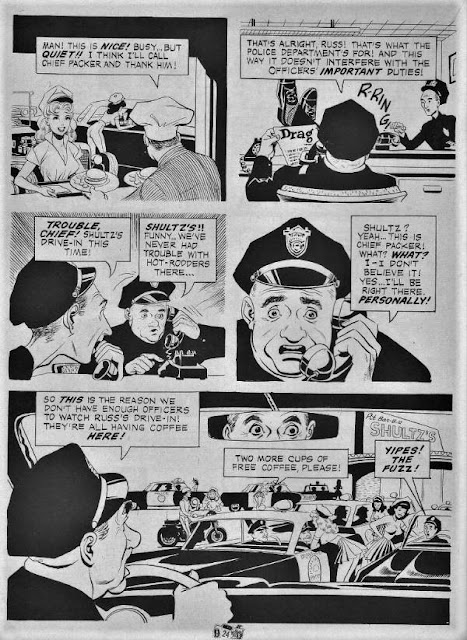 Next is a story by Alex Toth, author unknown. That's E.G. Marshall from a popular lawyer show The Defenders  as the prosecuting attorney condemning the hapless hero. 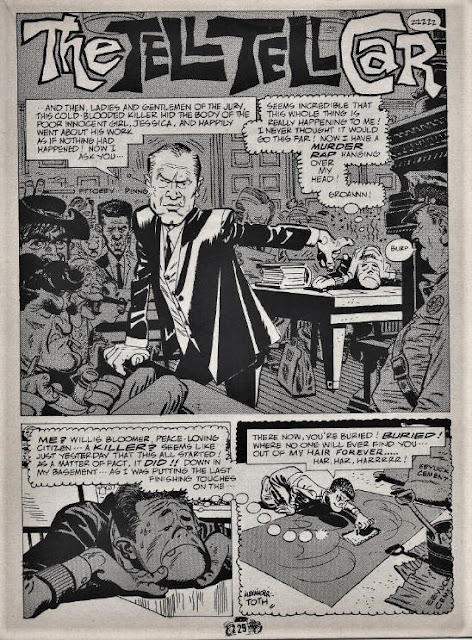 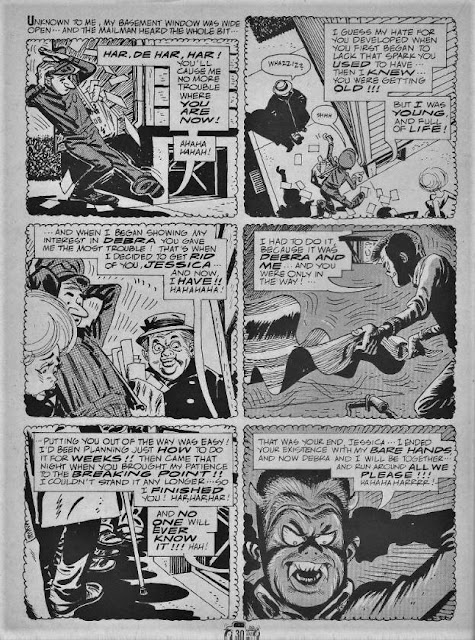 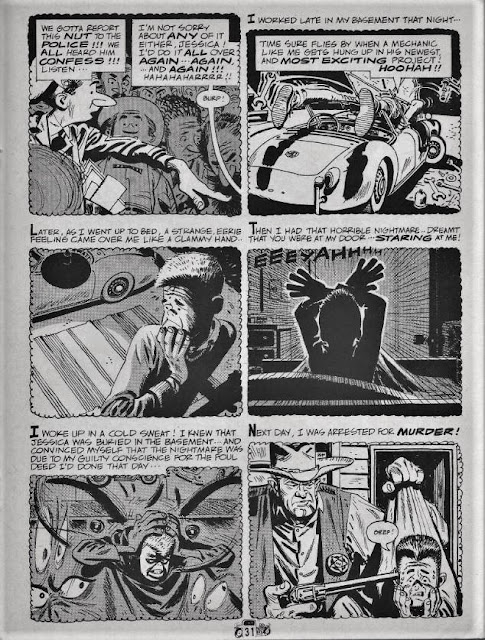 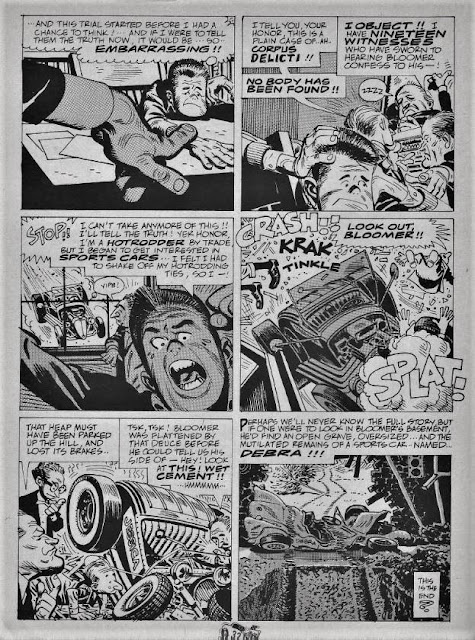 And finally, a simply gorgeous piece of draftsmanship from Warren Tufts. 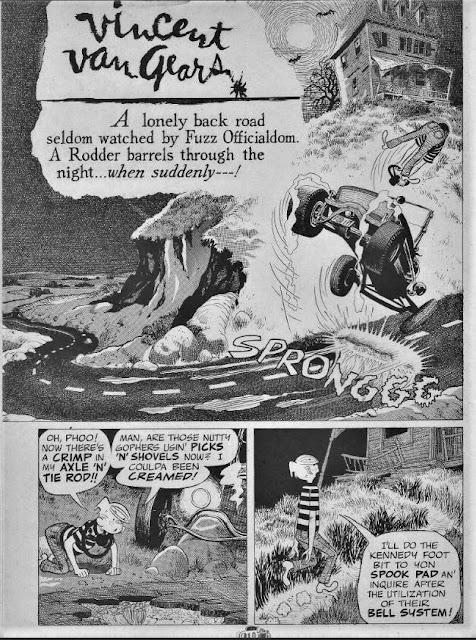 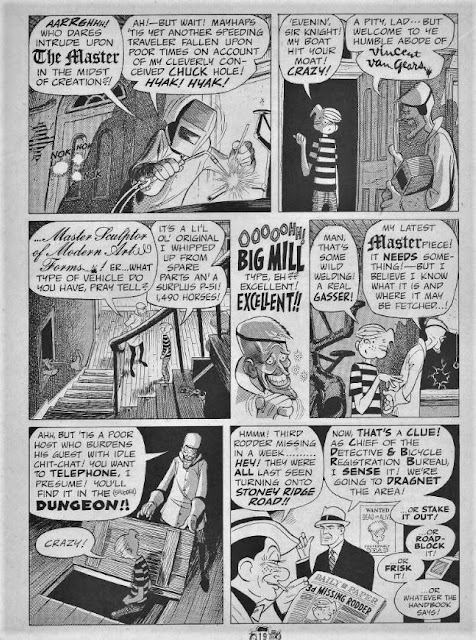 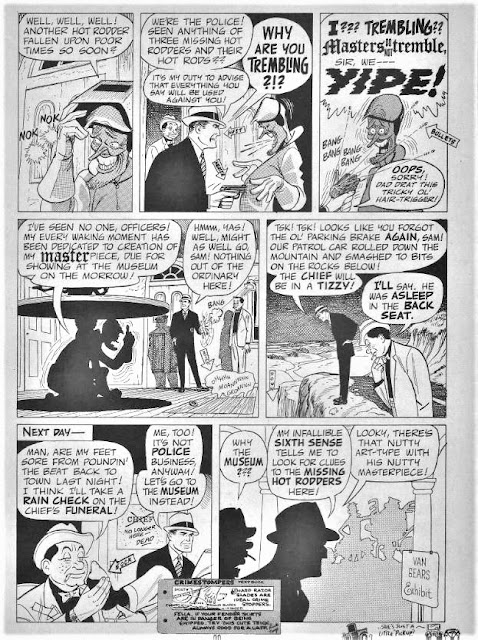