Jane Fonda comes back from boarding school to find her daddy’s ranch under fire from a powerful, land-grabbing robber baron. Her only choice is hiring a gunslinger of her own right out of a dime novel.

This classic comedy western still works. It’s funny, charming, and a true cinema gem quite unlike any other film in in the genre. Most notable is the choice to tell the story using a pair of balladeers to sing narrative codas and provide background. The ingenious idea of having them appear on screen as part of the action is nothing less than inspired. And the songs they sing, written specifically for the movie, are welcome additions to the entertainment rather than the cringe-worthy efforts we so often have to endure in westerns. Add to that that they are performed by Stubby Kaye and Nat King Cole and you’ve got pure gold.

Like all successful comedies, this one has a solid dramatic storyline from which to draw the laughs. In fact, Jane Fonda (when she was a promising young actor rather than a useful idiot for leftist causes) plays her part straight, making no effort to get laughs. And her performance is all the better for it by giving the story a dramatic core for the comic actors to play off.

Much has been made of Lee Marvin’s Oscar-winning performance as both the drunken Kid Shaleen and the villainous Tim Strawn. And it is a bravura performance with Marvin delivering hilarious extended comic soliloquies. Much of the success comes from the director’s request that Marvin play the role as a tragic, rather than a comic, performance. He asked Marvin to try and make the audience cry rather than laugh and the end result is hysterical.

The rest of the cast is equally effective with Michael Callan and Dwayne Hickman getting to deliver some great gag lines. And there’s a lot of Yakima Canut classic stunt work, particularly with Marvin’s wild horsemanship upon one of the most famous horses in movie history. If you watch this, pay close attention to the quite impressive square dance sequence all done in one extended take. 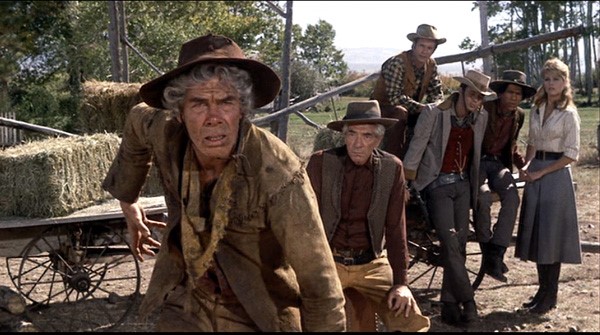 Gad Elmaleh and Sophie Marceau in a fun romantic comedy. Child-hating Gad falls for Sophie not realizing that she had three kids and a troubled past with a series of ex-husbands. The kind of frothy stuff that they make here with Matthew McConoughey and Kate Hudson with a Gallic twist. Meaning, lots more sex and excused amorality. Fun stuff with a gifted comic cast and the kids are funny without being cute and cloying. 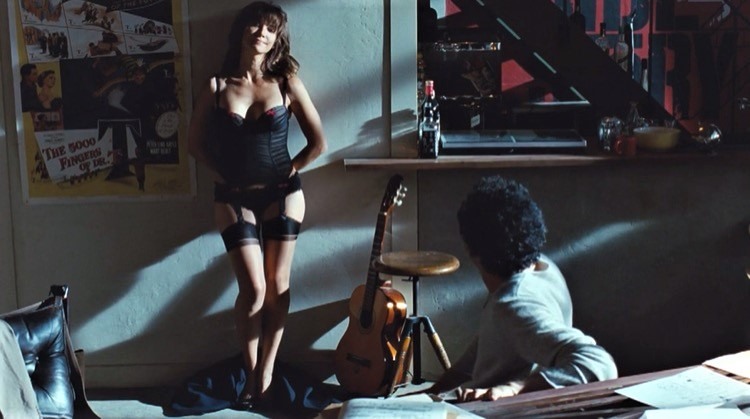 Handsomely mounted technicolor production that deserved better than the second feature programmer status it was deigned for. An additional twenty minutes for more character development would have helped this movie in a big way. An astonishing amount of story happens off screen or is explained away in exposition scenes. While there's lots going on, this lack of development at the beginning makes it hard to invest oneself in what comes after. I also had a problem with Dana Andrews as a rough and tumble man of the west. He simply never looks period enough in these movies. But he gets able support from Susan Hayward, Brian Donleavy, Lloyd Bridges, Andy Devine, Hoagy Carmichael and Ward Bond at his most primal. 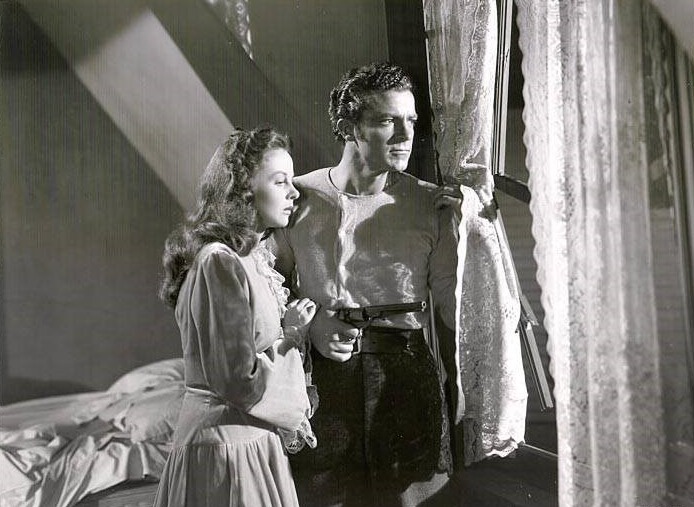 Complicated (perhaps TOO complicated) con artist/heist thriller done in the French once-over-lightly style. Jean DuJardin leads a cast of liars, tricksters and pigeons in the kind of movie where you learn never to trust what you can see. I'm seriously going to have to watch this one again and soon to catch what I missed the first time around. Great cast with Valeria Golino, Jean Reno and others. This one moves fast at a blink-and-you'll-miss pace. And Caroline Proust cleans up nice. I'm used to seeing her as the overly-obsessed homicide cop who never showers in the excellent series SPIRAL. 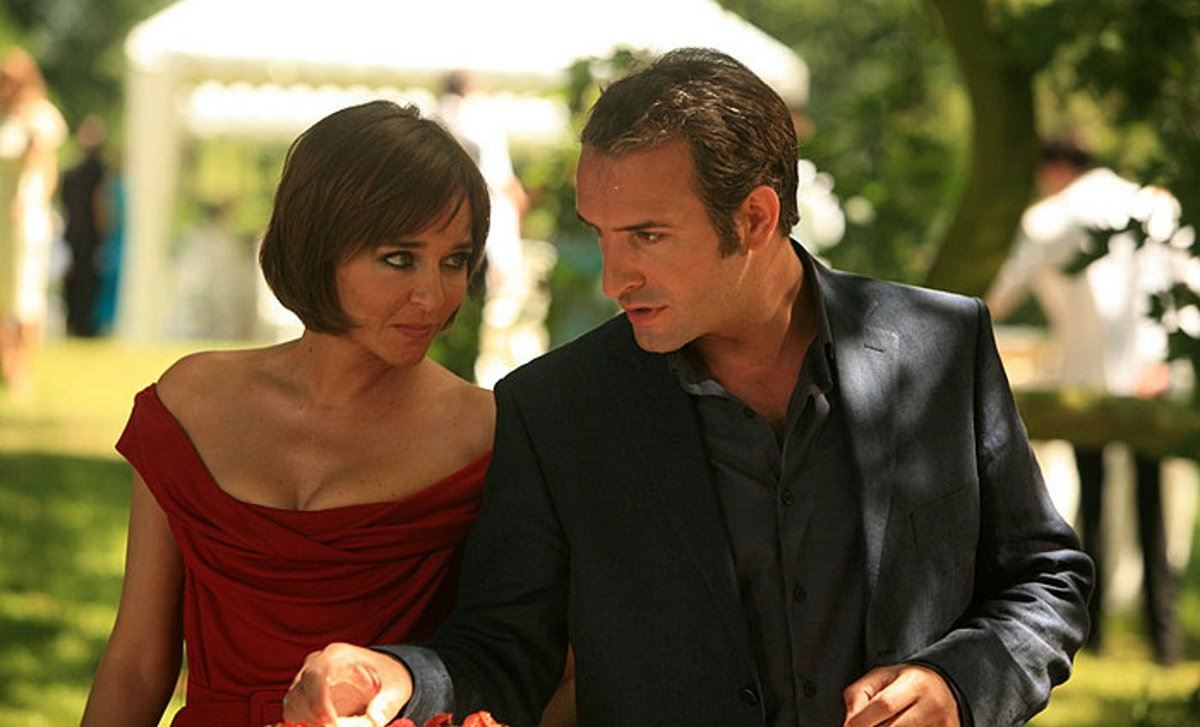 Effective and suspenseful movie about a rural French village that decides to evacuate before the German invasion of 1940. Well-crafted characters, harrowing action and high stakes in a deliberately paced story that will draw you inexorably into these people's lives. Matthew Rhys is excellent as a British soldier who joins the evacuation after his unit is slaughtered. This movie contain one of the neatest (and most desired) scenes of retribution I've ever seen on film. Epic in scale but highly personal as well. It took real skill to balance the big and small story here.

Another tale of evacuation before a Nazi invasion. This time it deals with the king of Norway and the choices he made following the betrayal of his country by both weak-willed politicians and ones who outright colluded with Hitler. Ironically, King Haakon, a monarch, is the one who saves Norway's democratic status. A real, grown-up historical drama done to perfection to present an important chapter of the war most Americans were not aware of. 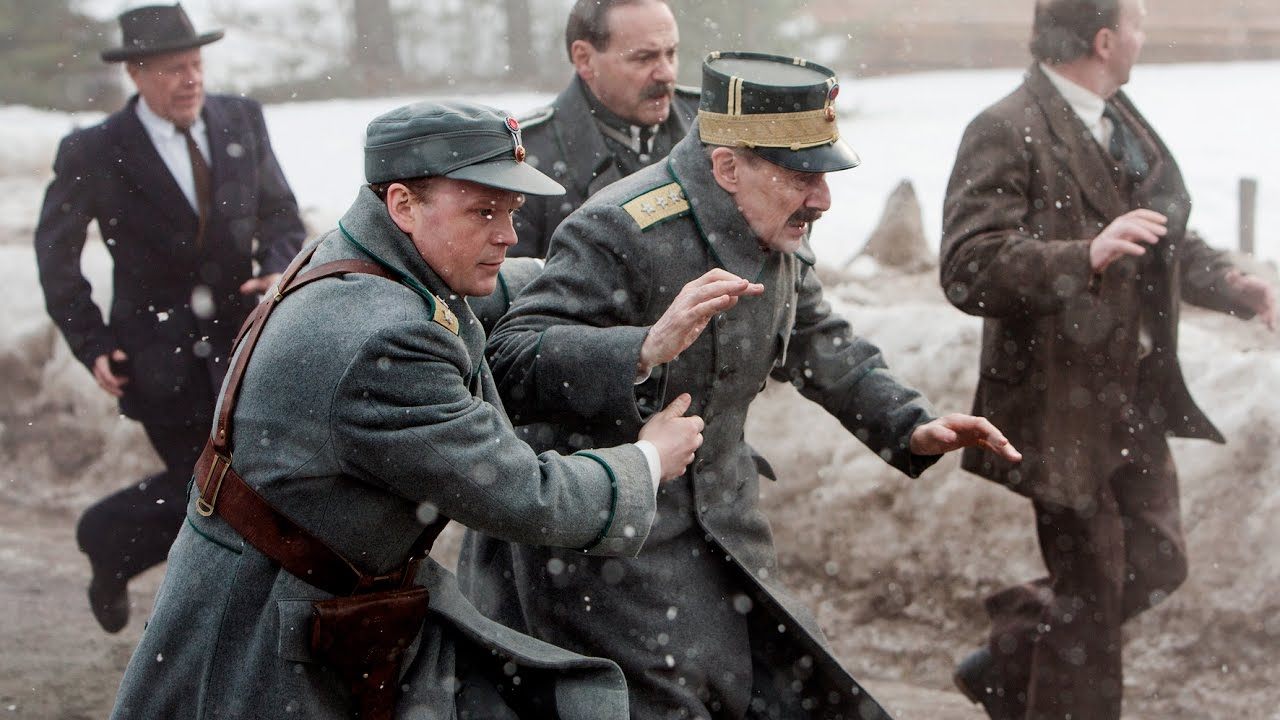 A small unit of Americans and Afghan troops are posted at a forward operating base that is situated on the floor of a valley and ripe for attack. The soldiers deal with daily attacks and the creeping sense of doom as one CO after another is targeted and killed by the Taliban.
Based on a true story, this movie makes a real effort to portray the events depicted as realistically as possible to the extent that some of the parts are played by men who were there. As a result, it succeeds in a big way, feeling brutally honest and unblinking in this story of courage, dedication and brotherhood.
The dialogue and action all come across as authentic and the point-of-view of the grunts on the ground is brought to life in a way that is seldom this effective. We’re taken into their daily lives in scenes in well-crafted scenes that inform as well as entertain. Compulsively watchable with a hair-raising, pulse-quickening extended climax that is marvel of action blocking as well as acting. Highly recommended for those who prefer their war movies hew to reality. 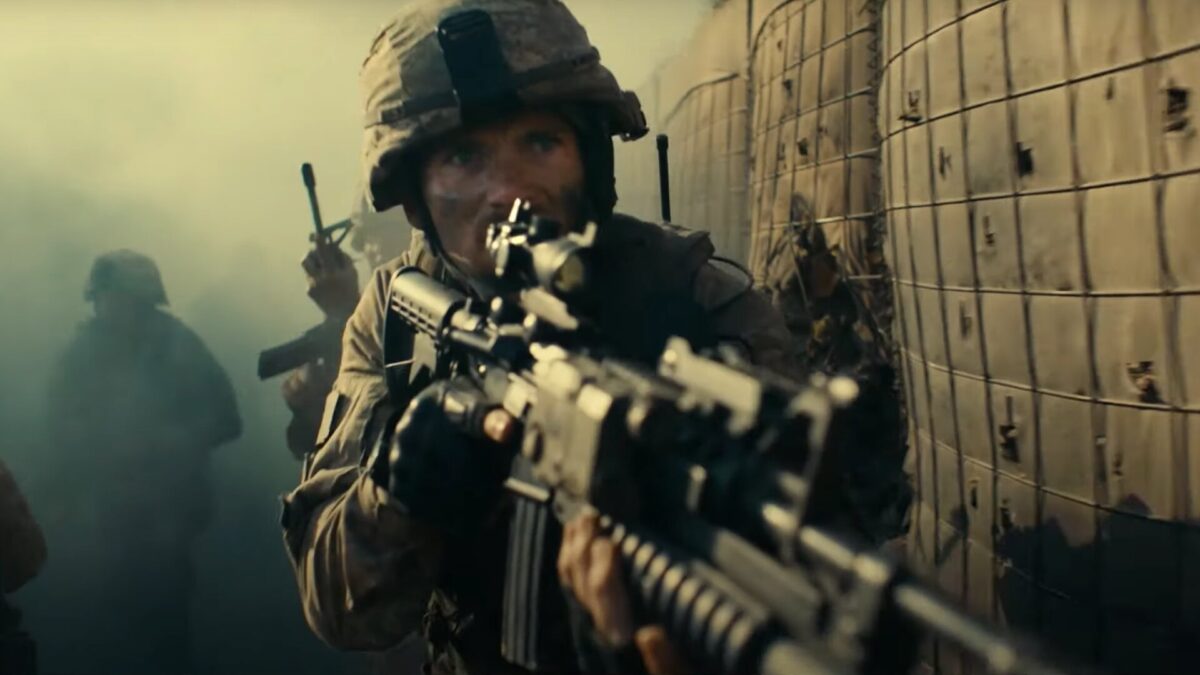 THE SECRET WAYS (1961)
Richard Widmark plays a mercenary operative who sneaks into communist Hungary to convince a leading dissident to escape to the free world. Things are complicated by shifting loyalties and, of course, a dame.

Based on an Alistair MacLean novel with all the plot gimmicks you’d expect from one of his stories. Unfortunately, the confounding twists so prevalent in his work are rendered even muddier than usual to the point where the viewer is left uncertain of who’s who and what their motives are. It’s also remarkably free of action until the third act when things pick up. This makes for rough sledding leading to the exciting climax that turns out to be too little too late. 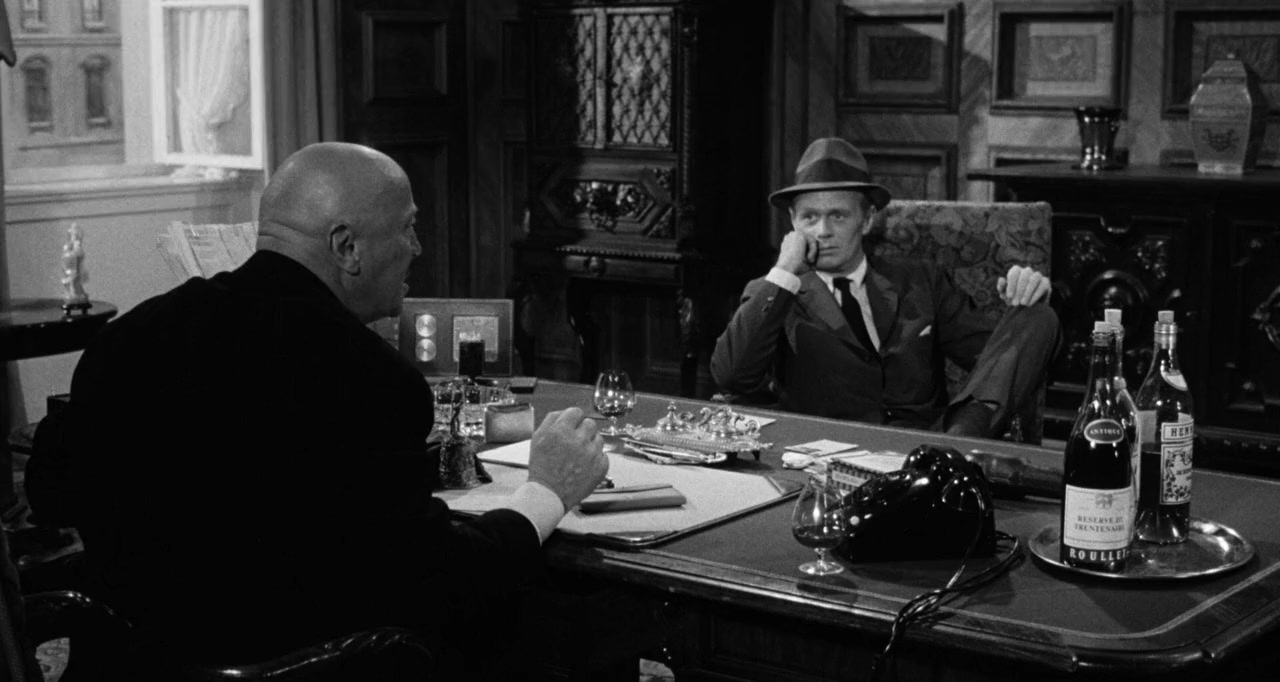 Jean Reno leads of squad of cops who are essentially gunfighters. He strongly suspects that a large private bank is being cased for a robbery by a violent gang. But, of course, he meets with resistance from his supervisor. This conflict isn’t helped along by the fact that Reno is bumping uglies with his superior’s wife.

Peculiar attempt to make a more American style cop thriller. I say peculiar as the French have a longer history of making quality policiers than the USA. The first act is a throwback to 80’s action films with flippant heroes, takeaway lines and cartoonish action. But it so settles down as the stakes rise and the drama takes a grim turn. The formal acts of the movie are high-octane action in a more realistic vein with a terrific running gun battle in the streets of Paris that’s a lot closer to HEAT than BAD BOYS.

It’s all worthwhile in the end and worth sticking with. 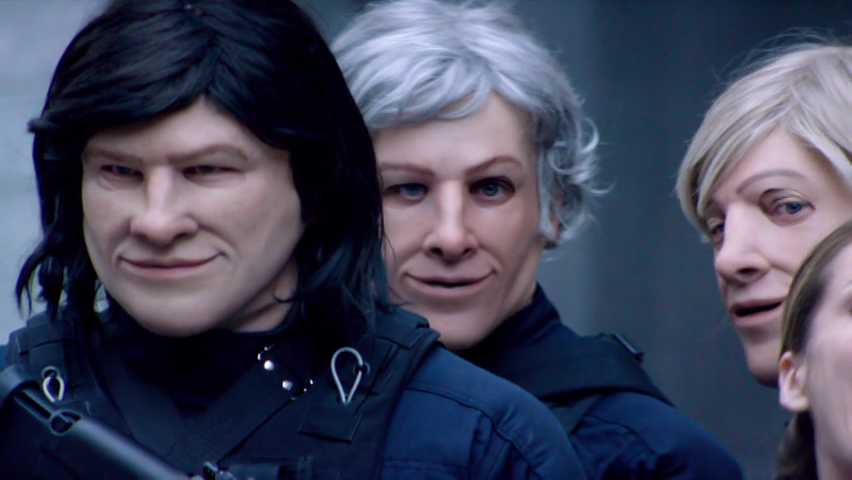 Clark Gable is the skipper of a freighter sailing the South China Sea and, boy, does he have problems.

Goodtime gal Jean Harlow’s on board looking to move their relationship to the next level just as Rosalind Russell, an old flame from Gable’s past, books passage with an eye to rekindling their romance. And, unbeknownst to everyone, the ship is sailing into pirate waters!

This movie is a prime example of the kind of high entertainment Hollywood produced with regularity in its heyday. It has romance, suspense, action and humor all served up by a top-drawer ensemble cast and all of it dazzles. Gable is at his easiest, relaxed best in the lead role and Harlow gives as good as she gets. We also have Wallace Beery along as the kind of smarmy louse he played so often. Another highlight is Robert Benchley as a persistently drunken passenger in bits he scripted himself. The balance of the mix is wonderful to behold as the gags all work but so do the set-piece actions scenes. A steam roller loose on the deck during a storm is a horrifying bit of business with high stakes and thrills. The humor and romance scenes do nothing to take away from the dramatic through line of the movie.  This is grand, crowd pleasing stuff and movie I’ve watched more times than I can count. 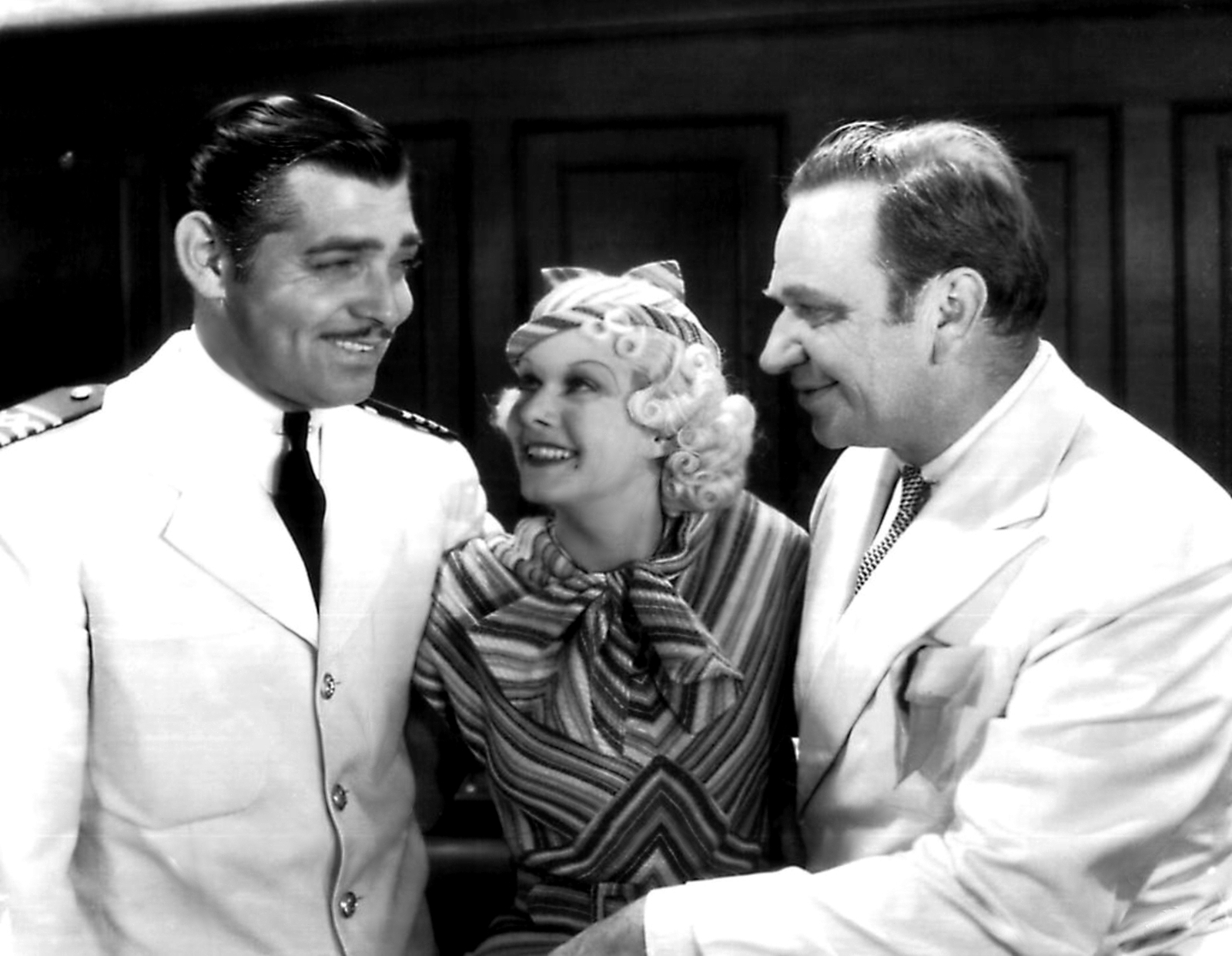 Epic retelling of the Allied landing on Normandy in 1944. We follow an international ensemble cast through the first day of the invasion of fortress Europe.

An ambitious effort to get across the scale, import and drama of a day that truly changed the world. Rather than trivialize the event by focusing in on the experiences of a small group of soldiers and their troubles and conflicts, this production sought to get across a panoramic view of the greatest amphibious landing in history through a series of loosely connected vignettes. And it succeeds in a big way to impart the events of the day with clarity and suspense and is equally successful in portraying the human angle as we grow familiar with a large cast of characters and follow them through anecdotes that are sometimes heartbreaking and sometimes humorous. All of this material was culled from Cornelius Ryan’s exhaustive interviews with the men and women who were witnesses and participants in that day. It helps that Ryan wrote the screenplay based on his bestselling history. 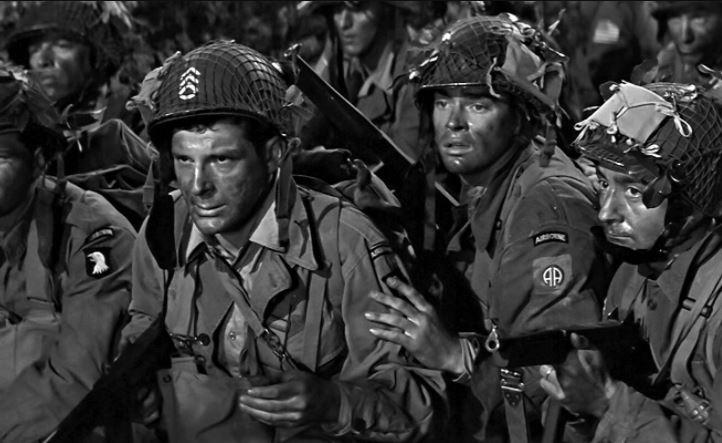